1 out of 5 – Would Reccomend: Lake Placid vs. Anaconda 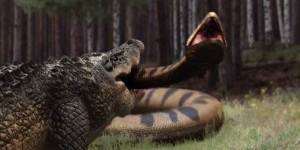 Welcome back to 1 out of 5 – Would Recommend, where crossovers don’t make us cross. Taking two popular monster franchises and crossing them over is a time honored tradition – Frankenstein meets the Wolfman, Mothra vs. Godzilla, Freddy vs. Jason, Mega Shark vs. Giant Octopus, etc. and so forth. Today, we chronicle one of the newest movies to do so: Lake Placid vs. Anaconda.

When a corrupt pharmaceutical company accidentally lets both giant crocodiles and giant anacondas loose on the fictional town of Lake Placid, Maine, it is up to tough-as-nails sheriff Reba and experienced game warden Tully to save the town. Complicating matters is a group of sorority pledges having a beach day right in the path of the crocs and ‘condas! And one of them is Tully’s daughter! There’s not much more to the movie’s plot than that, unsurprisingly. The film has the best CGI basic cable can buy.

SyFy Channel, who have been shepherding both the Lake Placid and Anaconda franchises since their respective second and third entries. This Sharknado-esque horror-comedy is a far cry from the theatrical releases that kicked them off, but succeeds in being pretty entertaining. We buy movie posters.

This movie is very much in the Sharknado vein of self-aware horror comedy, but manages to work by just slightly more in every aspect than “serious” direct to video monster movies. There is one odd factor: the movie is oddly continuity heavy, with Sheriff Reba (played by TV’s Witchblade, Yancy Butler) and Bickerman being returning characters from the Lake Placid sequels and the main human villain being the daughter of a character from the Anaconda sequels. You don’t exactly have to know who they are to enjoy the movie, but that’s more continuity than most mainstream versus movies have. Either way, movie’s surprisingly funny and at a Red Box near you, so give it a look! Also, the movie has the same sequel hook as Godzilla ’98. Unlike that movie, it may actually have a sequel.

NEXT WEEK: We’ll watch a true satire of so-bad-its-good, 1988’s Return of the Killer Tomatoes!