1 out of 5 – Would Recommend: Birdemic Shock and Terror 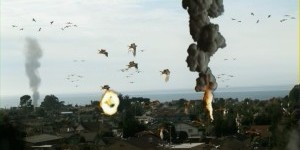 Welcome back to 1 out of 5 – Would Recommend, where the worst of the worst get the praise they deserve. Today, we’ talking about 2008’s inexplicable rip-off of a Hitchcock classic, Birdemic Shock and Terror.

What “Genius” Made This?

James Nguyen, a wealthy software salesman turned tech entrepreneur turned filmmaker. That was one turn too many and like Tommy Wiseau he’s proof that talent in business doesn’t translate to talent in film. His mastery is allegedly of “romantic thrillers”, and since Birdemic is the only one of his movies to gain any notoriety, he must not be quite as bad at those.

Which is the faintest of praise.

When Alfred Hitchcock made a thriller about birds turning on mankind, he tied live animals to Tippi Hedren until she had a nervous breakdown. It’s an all-time classic. When James Nguyen wanted to rip-off that movie, he had actors halfheartedly swat at GIFs with coat hangers. This too is an all-time classic. The movie demonstrates a lack of competence that goes beyond that of even the most inexperienced video production student and it is amazingly funny for it. If you’re so inclined, RiffTrax makes the movie even funnier and their version is great if you can’t convince any of your pals to watch the movie with you clean. Either way, check out Birdemic: Shock and Terror!

NEXT WEEK: Five Canadians with a little money and a lot of special effects skill bring the world 2011’s Manborg.

Category: TV & MoviesBy Chris WalkerMarch 17, 2015Leave a comment
Tags: 1 Out of 5 Would RecommendBirdemicRiffTrax