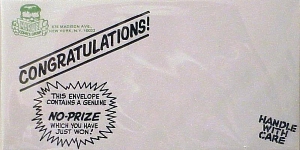 Wow!  Pretty darn cool.  So what exactly is a Marvel No-Prize?  Well, let me explain. Back in the sixties, Marvel was churning out a lot of classic comics, and most of them were written by, none other than, Stan Lee.  And quite a few of those comics were also drawn by Jack Kirby.  So mistakes sometimes got made.  Hey, how could they not.  Stan would forget a character’s alter-ego, or Jack would forget exactly how someone’s costume was drawn, etc.

For example, there was the infamous time that Stan, somehow, forgot that the Hulk was Bruce Banner, and he called him David Banner!  Well, that one could easily be fixed, by saying his full name was David Bruce Banner and that he went by his middle name, like a lot of people do.  In fact, both of my parents, went by their middle names.  I wonder what the odds of that happening are?  Probably higher than I would expect actually.

Then there was the, also infamous time, that Jack drew Mister Fantastic with three hands and only one foot!  Now that one might be harder to explain, but a loyal reader came up with a great explanation.  It happened on a splash page where Jack drew Reed falling and trying to catch himself, so the reader conjectured that he reshaped his foot to look like a hand to facilitate catching himself and prevent himself from falling.

Well, a great “save” like that, would earn the reader a No-Prize.  And reader friendly Marvel, back in the sixties, came up with the idea to acknowledge the reader with something, that would have no real value, but would mean something to the person who earned it.  And thus, was the No-Prize created.

Marvel would send the following to these people: This envelope contained nothing, but was worth it’s weight in gold, to someone who earned one!  The envelope itself was mailed inside another, outer envelope to the recipient.  So the true No-Prize never has the person’s name and address printed on it.

The picture above, I actually snagged off of the internet, but I’ve got my very own copy, though I will say that it is a little yellowed from time, but is still in outstanding condition.  And its just another one of my favorite Marvel collectibles that I have in my collection.

One other thing that I should mention, that by winning one of these No-Prizes, it gave you the right to brag that you were a T.T.B., or a titanic true believer.  Huh?  Well Marvel used to also allow you to give your self initials after your name, like earning a Phd in academia would.

Here is a short list, that was published in a Fantastic Four comic book from the late sixties:

The R.F.O (real frantic one) rank was relatively easy to attain, T.T.B. was quite difficult, Q.N.S. (quite Nuff sayer) wasn’t too hard if you kept writing letters to Marvel, as eventually they would publish one.  I think I had four or five published within a short year or two.  Anyone who loved Marvel comics and shared their love could earn the K.O.F (keeper of the flame) rank.  And if you could earn those first four you earned the P.M.M. rank (permanent Marvelite Maximus).  And frankly any true blue Marvel fan could bestow upon themselves the F.F.F. ranking (fearless front facer) for our devotion to Marvel Comics!

So, any of my readers want to weigh in on their own ranks?  I’d love it if you left me a comment via Twitter, Facebook, or here on the Back to the Past website.

And please be sure to check back next week for a new RETRO REVIEW.  Be here or be square!  Adios true believers!