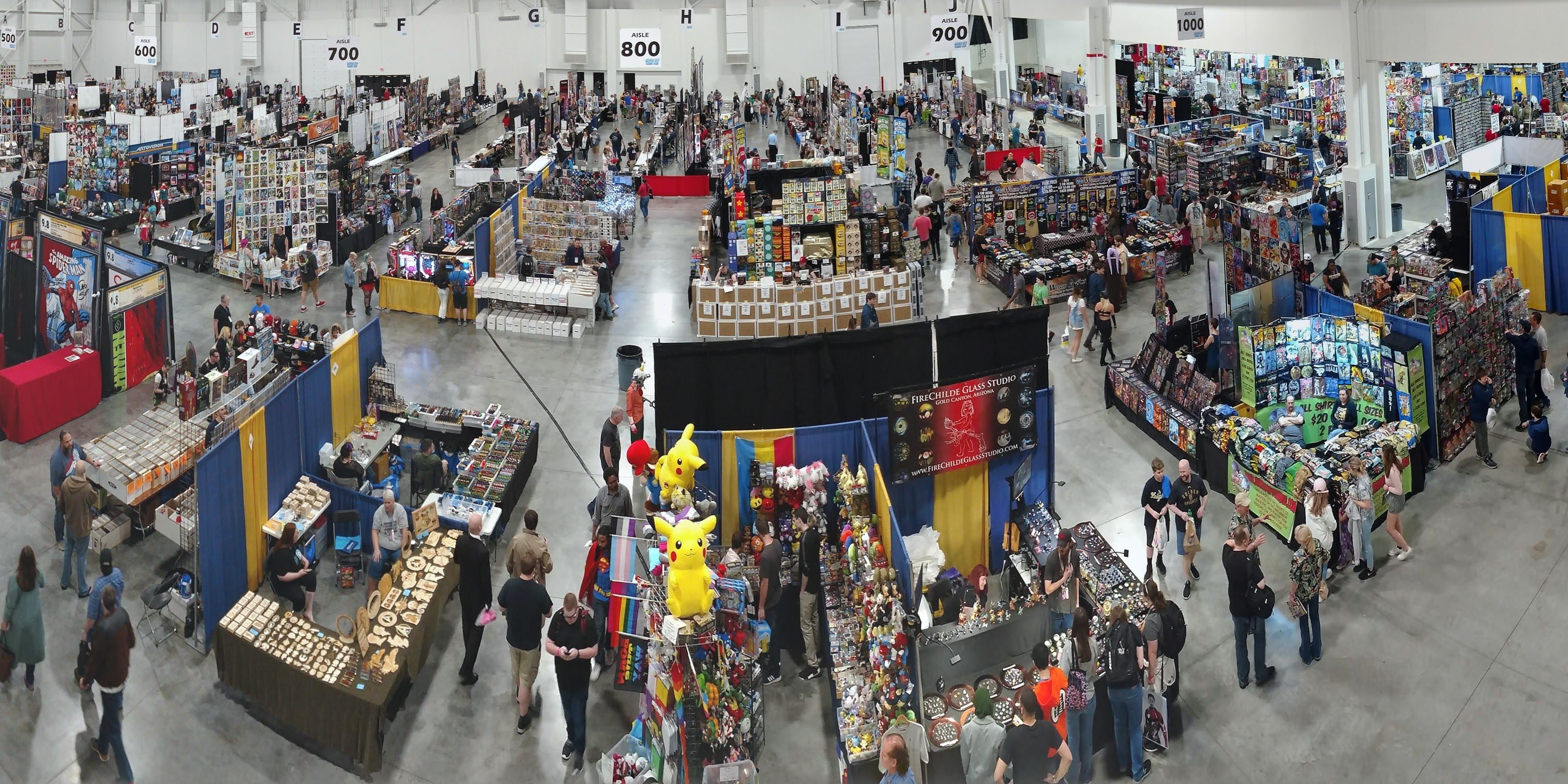 Motor City Comic Con celebrated its 30th year May 17 – 19, making its annual appearance at the Suburban Collection Showplace in Novi, Michigan. The recent two-floor addition to the convention center nearly doubled the facility’s existing exhibition space, allowing the convention to house approximately 325 celebrity and comic guests. By comparison, the first convention in 1990 featured around a dozen comic guests at the significantly smaller Dearborn Civic Center in nearby Dearborn, MI.

After The Walking Dead

One franchise that remains popular with attendees is The Walking Dead, and the AMC series was represented with appearances by actors Tom Payne and Alanna Masterson. A more clean-shaven Payne – who had eagerly shorn the long beard and hair required for his role as Jesus – also appeared at the con two years ago. Masterson was supposed to accompany him that same year, but was forced to cancel due to the show’s shooting schedule. Fear the Walking Dead’s Garret Dillahunt was also scheduled“ to appear this year, but cancelled.

Payne and Masterson appeared on Friday’s “The Dead of The Walking Dead” panel, discussing their experiences on the show, and what’s coming next for the actors. When asked by a fan about their reactions upon learning that their respective characters were going to be killed off, the two had somewhat differing reactions.

“I was kind of over it,” Payne responded, regarding his role on the show. Payne expressed he had enough of the role, and was happy with the way his character met his demise. Masterson stated that she received a phone call from the show’s producers that her character Tara was also going to be killed off, and was similarly ready for a change. Masterson added that she wanted to focus on being a mom for the time being, but would welcome that the chance to direct at some point in her career.

Payne will continue his career in front of the camera in the upcoming crime drama Prodigal Son, debuting this fall on FOX.

Other celebrities left their mark on the show. Actor and comedian Pauly Shore (Totally Pauly, Encino Man) was a prolific presence both on the show floor and in the adjoining hotel bar afterwards. One attendee reported that Shore brought donuts to fans hanging out at the bar late Friday night.

Shore maintained his presence at the show, despite a family tragedy the next day. The actor announced on his Twitter account Saturday afternoon that his father Sammy Shore had passed away that morning. Shore still appeared at the show and greeted fans that day, however, and even played two stand-up shows at the Magic Bag Theater in nearby Ferndale, MI that evening.

While many fans congregated on the celebrity end of the exhibit hall, others flocked to the other side to meet their favorite comic book creators. Veteran artist Tom Grummett returned to Motor City Comic Con, and talked about his more recent but lesser known works. 2018 Inkwell Award winner Joe Prado was busy throughout the weekend drawing sketches for fans. And longtime illustrator John Bolton was a popular draw for both his painted and pencil work over the years.

Artist Ted McKeever spoke highly of the convention’s organizers. McKeever – who noted he has largely retired from convention appearances – anxiously agreed to appear at this year’s show when invited. McKeever had also appeared at the show in 2016.

Competition From Other Places

This year’s Motor City Comic Con featured direct competition from two other notable conventions held the same weekend. The annual MegaCon was also held in Orlando, FL, and featured comic guests who have appeared at past Motor City Cons, including Neal Adams, Greg Horn, and Alex Saviuk. Actor David Tennant also appeared at MegaCon Friday and Saturday, but ventured up to Novi to at least great fans on Sunday.

East Coast Comicon also took place the same weekend in Secaucus, NJ. Among the comic guests there were past Motor City mainstays such as artists Simon Bisley and Billy Tucci. Despite the head-to-head competition, though, attendance appeared strong at Motor City throughout the weekend, particularly on Saturday – a typically busy day for the event. Convention organizers Michael Goldman and Miriam Kruger both stated that ticket sales for Sunday were up over 50% from last year – a jump both possibly attributed to the appearance of Tennant on Sunday only.

The convention landscape is much more crowded than it was when Motor City Comic Con first launched – but there certainly seem to be enough guests and attendees to go around. The convention has already announced next year’s show, scheduled for May 15 – 17, 2020 again at the Suburban Collection Showplace in Novi.

Special thanks to Jill Liptow for the assistance and photo help, and to Dave Marchand and Jeff Myszynski for the assist on some of the events I missed!