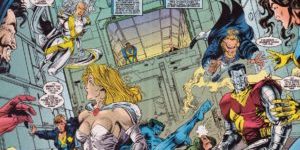 Welcome back to Strange Times & Places, where we examine comics and other media that answer the question “what if”. Seeing as FX’s Legion has made David “Legion” Haller far more popular than he’s ever been before, we’re looking at What If? #77, “What if Legion Had Killed Magneto?”

This, like most issues of What If?, is a For Want of a Nail story. Specifically, when Legion traveled back in time to kill Magneto (the impetus for the classic Age of Apocalypse event), he went back to a time before he’d met Professor X. Thus, Legion succeeds in his goal…though it doesn’t end up much better than AoA. In a world long on X-Men but short on charismatic mutant terrorist leaders, mutantkind has been accepted by humanity: The X-Men are best known as celebrities, the Hellfire Club has grown into one of the largest corporations on Earth, Beast is a famous novelist, the Xavier Institute is a tourist attraction, things are going OK. However, Professor X is mildly concerned that his dream of coexistence has ended in little more than novelty status for mutantkind and very concerned about the powerful, dangerous mutants who’ve been popping up – and disappearing – from his Cerbero scans. Something’s brewing, something bad, and the X-Men might not have the hard-won battle experience to stop it.

Cyclops & Phoenix, the only competent X-Men.

In a world characterized by a weakened X-Men and the absence of Magneto (and Mystique, for some reason), Apocalypse has a lot more time to quietly recruit mutant supremacists to his “survival of the fittest” ideology and faces a lot less competent opposition when he finally fields them.  Most of the characters who fall in with him, such as Sabretooth and Pyro, make perfect sense as followers of Apocalypse.

Further, the X-Men being incredibly rusty in a world where Magneto and the various Brotherhoods of Evil Mutants makes sense. The X-Men fought ol’ Mags a LOT prior to Uncanny X-Men #200 and a world without him would see them doing battle with far more minor foes than evil masterminds. With Mystique inexplicably absent, that removes many more chances to temper their powers with skill.

The story works really hard to be dystopic. It’s not adequately explained why the X-Men would be a dog & pony show rather than a respected superhero team like The Avengers, characters like Wolverine and Psylocke join up with Apocalypse in stark betrayal of their non-X-Men backstories, Mystique – someone almost as important as Magneto – is nowhere to be seen, etc. These elements ultimately make the story a lot less satisfying than it could have been Come back next week when Tokusatu Gesundheit goes out to the movie theater for Kong: Skull Island!