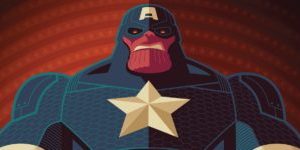 Welcome back to Strange Times & Places, where today we’re celebrating the release of Avengers Infinity War this weekend with a look at What If? Infinity: Thanos, which asks the question “What If Thanos Joined The Avengers?”

It’s a For Want of a Nail story, in which Thanos is tapped by J’Son of Spartax to aid The Avengers and the Galactic Council against the Builders during Marvel’s Infinity crossover.

The incredibly powerful Builders, a race that inhabits the Superflow between realities and uses armies of genetically engineered servants to reshape planets as they see fit, are laying waste to our galaxy. The Avengers have joined forces with the Galactic Council (combining the power of the Shi’ar, Skrull, Kree, Spartax, The Badoon, The Annihilation Wave, and the Brood) to end the threat, and the war is still proving to be a losing one. Thanos and his Black Order propose a desperate alliance, one the Council is in no position to refuse, and fights beside The Avengers to turn the tide against The Builders But Captain America doesn’t trust Thanos, and those suspicions will turn out to be well founded…

Come Back Next Week for Another On-Theme Installment of 1 out of 5 – Would Recommend!