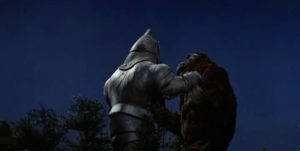 When his mining robot, Mechanikong, fails in obtaining the highly radioactive Element X, the evil Dr. Who (no relation) sets his sights on kidnapping the real thing – King Kong himself – to do the job. Unfortunately for him, his old nemesis Commander Carl Nelson of the United Nations Navy is leading a scientific expedition to study Kong and isn’t going to let that go unchallenged – and Kong’s not a fan of the plan either! Kidnapped King Kong, in need of a giant harmonica.

Toho licensed King Kong from his American creators, RKO Pictures, in the mid-60s to produce King Kong vs. Godzilla, a crossover between cinema’s two most famous giant monsters. The movie was successful on both sides of the Pacific, so naturally Toho wanted to do more with the giant ape. They kicked around a few sequel ideas, including one that would become the Godzilla/Mothra adventure Ebirah, Horror of the Deep, before settling on a loose adaptation of the Rankin-Bass (who would coproduce their film) & Toei Animation produced cartoon The King Kong Show.

More than any other Kaiju flick we’ve watched to date, this movie has the Saturday afternoon children’s matinee feeling that would come to be associated with the genre in the U.S. That isn’t a bad thing – this movie is a fun mash-up of Japanese Kaiju, King Kong, and 60s spy movies that provides quite the enjoyable ride. NEXT WEEK: Tokusatsu Gesundheit gets the week off while Strange Times & Places, an examination of all things Elseworlds and What If, debuts with a review of Justice League: Gods & Monsters.

IN TWO WEEKS: We keep watching Toho’s take on American monster with Frankenstein Conquers The World!