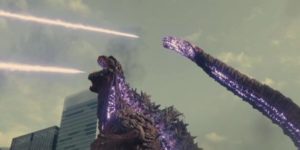 A giant, radioactive creature enters Tokyo, causing plenty of damage even before it makes landfall. The Japanese government must come up with a solution to this unprecedented problem, as the situation (and the creature itself) rapidly evolves.

Inspired by the commercial and creative success of Gareth Edwards’ 2014 Godzilla flick, Toho decided it was time to wake the proper King of Monsters from his ten year slumber. With director Hideaki Anno (of Neon Genesis Evangelion fame), they produced a brand new feature that got back to the political roots of the franchise – 2016’s Shin Godzilla. Overall, I found the movie to be pretty boring. I genuinely appreciated the points listed in the highlights, but most of the flick played more like an episode of the West Wing where the political crisis-of-the-week happens to be giant monster attack. Being as I’m not well versed in Japanese politics nor have I studied the flaws in the responses to the Fukushima Daiichi nuclear disaster and the 2011 Tōhoku earthquake/tsunami, most of the political commentary was lost on me. Seriously, I had a hard time jumping to a scene that wasn’t Japanese people talking bureaucracy to get stills.

Come Back Next Week For A New Strange Times & Places!