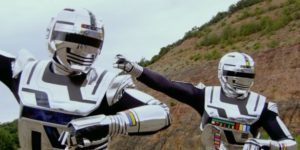 The remake and the original…

Welcome to Tokusatsu Gesundheit, where beloved children’s shows of the 1980s get rebooted for modern audiences – yep, that’s an international phenomenon. We’re watching an example of said phenomenon AND discussing the third pillar of Toei’s Tokusatsu legacy with 2012’s Space Sheriff Gavan: The Movie! Missing astronaut Geki Jumonji returns to Earth as Space Sheriff Gavan Type-G, hunting for fugitive members of the Space Mafia Maku. He will have to team up with both his new colleagues in the Galactic Union Patrol and his old colleagues at SARD (AKA fictional Japanese NASA) to put an end to Maku’s plans and influence on Earth! The evil Brighton, whose name is hard to take seriously

Space Sherriff Gavan premiered in 1982, chonricling the adventures of an alien police officer as he did battle with the rubber monsters of the space mob. It was a huge hit, spawning two more seasons of Space Sherriff adventures (Sharivan and Shaider) and a total of seventeen seasons of what Toei dubbed “Metal Heroes”.  The last installment in the franchise ended in 1999, and the franchise was rendered somewhat obsolete by Metal Hero-like elements added to the revived Kamen Rider series.

UNTIL 2012! That year, Toei celebrated the 30th anniversary of Gavan with Kaizoku Sentai Gokaiger vs. Uchuu Keiji Gavan: The Movie, a crossover with the ridiculously successful 35th anniversary season of Super Sentai. That flick was hit, prompting the speedy creation of this theatrical feature in an attempt to revive the franchise. While the next generation of Space Sheriffs have seen a little more action in crossover and direct to video films, it seems that a full revival just wasn’t meant to be. the all-new Shadier, Gavan, and Sharivan. It’s from the Gokaiger crossover, but I just had to include the time three Kenji Ohbas met each other.

NEXT WEEK: Stranges Times & Places examines a hellish nightmare world in which Spawn is a family friendly franchise.