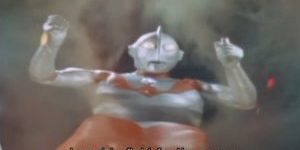 Science Patrol pilot Shin Hayata’s jet is blown out of the sky by an alien red light while investigating an alien blue light. Luckily for him, that red light is an alien warrior from Nebula M78 who willing merges with Hayata to save his life. Together, they are capable of transforming into Ultraman, a gigantic super hero who battles the giant alien monsters attacking our world! Eiji Tsuburaya is the special effects whiz who worked on Gojira, who went with the film’s iconic suitmation effects when Harryhausen-style stop motion proved outside the production’s scope. He would go on to do effects for many of Toho’s monster movies, creating a number of iconic Godzilla franchise monsters (including Mothra and King Ghidora). His own studio, Tsuburaya Productions, focused on TV work, helping to popularize Tsuburaya’s suitmation techniques.

The first two episodes are a strong start to the series, introducing the hero and his world in an effective manner. It’s well written, has above average special effects, and it’s easy to see why Ultraman spin-offs continue to this day. Best of all, it’s streaming free on ShoutFactoryTV on Roku and Smart TVs (and on computers).

NEXT WEEK: We’ll be watching 2003’s Godzilla, Mothra, and King Ghidrah: Giant Monsters All Out Attack.