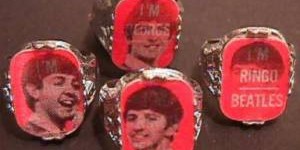 Hi everyone and welcome to another Fabulous Find!  This week, in honor of The Beatles first American television appearance, fifty years ago this week, on the Ed Sullivan show, I thought I’d share a couple of my Beatles collectibles for you viewing pleasure!  And I might even link to a Beatles YouTube video if I remember at the end of the post.

The Beatles on the Ed Sullivan Show February 9, 1964

Wow, where does the time go?  It just doesn’t seem possible that fifty years have past since this historic date.  But it’s true what “they” say, time flies when you’re having fun!  And I’ve certainly had my share!!!

The Beatles were already well known in their home Country of Great Britain, but finally had a number one hit in America!  And what was that hit, you ask?  Well in the words of my friend, Jim, I will tell you …  That first number one hit in America was the single; I Want To Hold Your Hand!  It was released on Capitol Records here in the States.  Previously their singles had been released on Swan and Vee Jay Records, but these labels were just too small to get noticed apparently.  As those singles barely hit the charts and came no where near topping them!

And once they had a number one hit in America in January 1964, they got an offer from Ed Sullivan himself, who had seen Beatles fans reaction to their heroes in England, while he was travelling.  He and the Beatles’ manager, Brian Epstein, quickly negotiated a then unheard of three appearance contract, where the Beatles were to appear three weeks in a row.  The Beatles appeared live on Sullivan’s show on Sunday, February 9, 1964, again the following week on Sunday, February 16, 1964, and then one more time the following Sunday, February 23, 1964.

Oh yeah, the Beatles were made up of four young men, named John Lennon, Paul McCartney, George Harrison and Ringo Starr!  But I’m sure you all know that!

Their fourth and final appearance on the Ed Sullivan show took place the following year, on Sunday, September 12, 1965, for the record, and if you’re keeping track.

On that first show (February 9, 1964) the Beatles performed five songs.  They led off with All My Loving, followed by Till There Was You, then She Loves You.  Then the rest of the show continued and the Beatles came back at the end and did I Saw Her Standing There and their recent number one hit, I Want To Hold Your Hand!

For the second show (February 16, 1964) they began the show doing She Loves You, This Boy and All My Loving.  Then at the end they returned and sang; I Saw Her Standing There, From Me To You and I Want To Hold Your Hand.

On the third show they performed; Twist And Shout, Please Please Me at the beginning of the show and then returned at the end to sing; I Saw Her Standing There, From Me To You and I Want To Hold Your Hand!

For that first historic show, it was estimated, that a then record 73 million Americans, tuned in to see The Beatles, many getting there very first look of this group that changed musical history.  Four lads from Liverpool!

So what about those Beatles collectibles I was talking about at the top?  Sorry, but I thought I should put things into perspective first.  So forgive me if you didn’t appreciate the history lesson!  On to the collectibles, from my personal collection.  I’ve got a ton of Beatles stuff, including all of the original card sets from the sixties, and quite a few original magazines, but the two I want to share with you today is the Beatles Seltaeb rubber dolls that came out in 1964, soon after their appearance on the Ed Sullivan show.  You could buy these at places like Kresge’s Five & Dime.  Take a look: 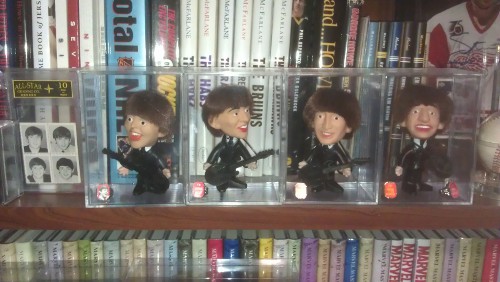 These cute Beatles look-a-likes were inexpensive at the time and still readily available to purchase on eBay today, fifty years later.  But you can expect to pay a lot more for them today!  They came packaged individually, so you could buy your favorite Beatle, or collect them all.  As you can see, I do not own the original packaging, though I have seen reproductions of that packaging being sold on eBay.  I display my set in clear plastic cases that I think are sold to store sport cards in.

Here is a picture I snagged off the internet showing the dolls in their original packaging:

If you look closely at my dolls above, you’ll see the second collectible I want to share.  At the bottom of each of the cases is a ring, and in Ringo’s case there are two rings.

Also in that first rush of selling all things, Beatles, to kids across America, these flicker rings was sold in gumball machines.  Each ring features an individual Beatles’ picture, well their head anyway, and then when the ring is moved or tilted, the ring changes to show their name with Beatles underneath!  Here’s a close up I found via the internet, rather than trying to scan the rings I own: 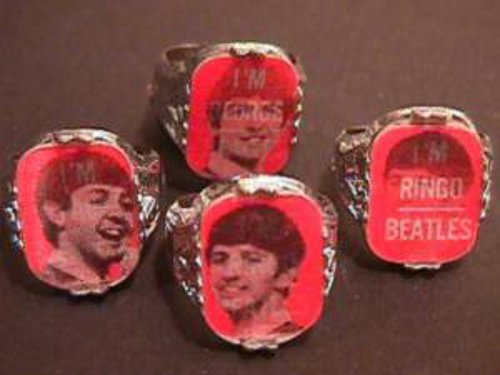 I owned one of the Ringo rings from quite a number of years ago, but found a set, of all four, at a reasonable price within the last year and decided I must add them to my Beatles collection!  That’s why I have two of Ringo, but only one of the other three.

These original rings were mounted on the Silver rings.  Not real silver people!  It’s silver paint over plastic, obviously!  A few years later, the same lenticular pictures were sold again, only using blue plastic rings for the second issue.  So it’s quite easy to tell the originals from the second generation ones if you want to collect them today.

The Beatles Performing on the Ed Sullivan Show

As promised, here’s a link to YouTube video, where someone has been kind enough to put all three of the Beatles’ Ed Sullivan performances together for our enjoyment.  So take a look at history in the making from fifty years ago!