RETRO REVIEW: Challengers of the Unknown # 81 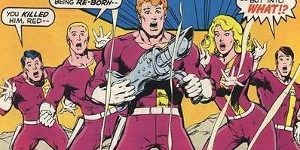 Okay fans, it’s time for a new RETRO REVIEW.  Yippee Kay Ai!  And this week, it is time to visit the DC Comics portion of the secret comic book vault buried in a super secret location (think Superman’s Fortress of Solitude) ((or if you’re even older, think Doc Savage’s Fortress of Solitude)).  Wait a minute, Supes and Doc both had Fortress of Solitudes?  Of course they did!  Oh yeah, the comic book I’m suppose to be reviewing, retroactively … Well, how about … Challengers of the Unknown # 81, published by DC Comics and cover dated July 1977.

Here is the cover to that issue, as pencilled by Mike Nasser (Netzer) and inked by Neal Adams: 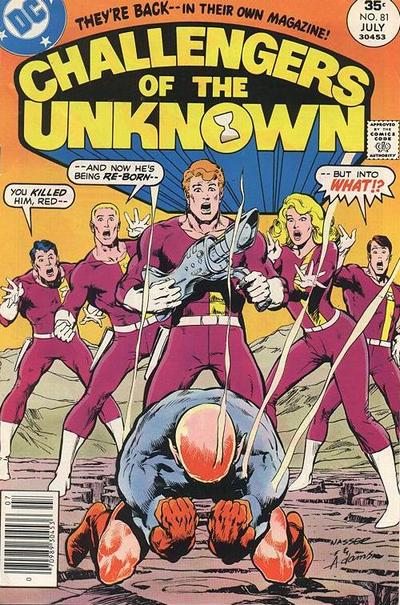 The Silver Age Challengers of the Unknown comic book had fizzled out sometime prior to this and it had gone the reprint route for a while.  Then in 1977, the powers that be at DC decided to bring back Red Ryan, Ace Morgan, Professor Haley (not be be confused with Major Matt Healy from the television show, Bewitched!) and Rocky Davis.  And let’s not forget sometime Challenger, June Robbins.

So do they bring them back in their own comic?  No, of course they don’t.  They decide to feature them in a comic book entitled; Super-Team Family, issues eight (8) through ten (10) to be exact.  Kinda like starting all over again, like the original Challengers first had a try-out start in Showcase Comics back in the fifties, before getting thier own comic.

Well history repeated itself, as after these three issues of Super-Team Family, the Challengers move back into their own comic book, continuing the numbering from their original run, hence the first issue was this issue, # 81.  Still with me?  Well, to make matters just a little more complicated the storyline which began in Super-Team Family continues into issue # 81.

But, no matter, DC was kind enough to give us a two (2) page flashback to bring any new readers up to speed.  The book opens with Professor Haley diving into the ocean and searching for their greatest foe, Multi-Man’s secret lair, which just happens to be underwater and where Multi-Man is holding June Robbins prisoner.  The Professor finds it, but is shot by some kind of ray.

The scene shifts to the other three Challengers, flying to Los Angeles, where there just happens to be a hidden US nuclear reactor, just on the outskirts of L.A.  Somehow, Multi-Man has created a forcefield around the reactor and is planning to blow it up, destroying Los Angeles.

Red Ryan, using a”Neutron Gun”, that he just happens to have along with the high flying Challengers, punches a hole through the forcefield and tries to find Multi-Man,  Back to the underwater lair, where we find June and the Professor alive and attempting to escape.  Then it’s right back to L.A., where Red tackles Multi-Man alone.  Red seems to overcome his enemy by blowing him up, or does he?  Nope, it seems that Multi-Man has teleported away at the last second (apparently to Denver, Colorado, of all places).

We then get a page of sub-plot, with Gaylord Clayborne breaking into the Challengers mountain headquarters and finding a discarded bit of paper, which turns out to be a medical report.

Then it’s back undersea, where the Professor and June manage to knock out Multi-Man’s power to the lair, and unexpectedly, also knock out Multi-Man’s power connection.  So in Denver, where he has teleported and the other three Challengers have followed, Multi-Man shrinks down from giant-size and Rocky  is able to defeat him, using his bare fists.  In the ensuing battle Multi-Man is thrown from a cliff to his apparent death.

But anyone familiar with Multi-Man, realizes that when he dies, he is resurrected with a new set of powers.  But this time, he comes back as regular guy, Duncan Pramble, with no powers, for some reason.  We also get a one panel, elsewhere, to someone named Doctor Heathcliff Monroe in Perdition, Massachusetts.  Which is setting up the next couple of issues, again for those in the know, Doctor Perdition is a foe of the Swamp Thing.

And the final page see the Challengers return to their mountain HQ and the information is revealed that the Professor is dying! Da da da dum!!!  This issue was entitled; “Multi-Man’s Master Plan” by the way. And the issue was written by Gerry Conway, pencilled by Mike Nasser and inked by Bob Wiacek.  Unfortunately, this revival only lasted six (6) more issues and ended with issue # 87, a year later.  But between issue # 81 and # 87, the Challengers hosted guest stars; Swamp Thing, Deadman and even Rip Hunter, Time Master!  That’s some pretty cool guest stars, in my book!

Maybe not a great run, but one worth collecting, and you should be able to pick these issues up relatively cheap, via the secondary market.  Check your local comic book stores first, but if they can’t help you, then there is always eBay.

That’s this week’s RETRO REVIEW, not bad since I’m on vacation, visiting the beaches of Florida, while it’s winter up in Michigan.  Please come back next week for a cool, or maybe that should be hot, as I’ll still be in Florida,  Fabulous Find.  And you’ll find a new RETRO REVIEW here in another two weeks.  Don’t be a stranger and leave me some comments people!  I’m lonesome for some interaction from my peeps!