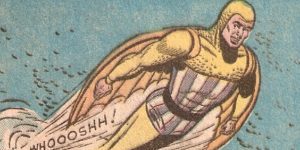 Welcome back to My Hero, where the motley assortment of weirdo characters in the My Hero Collection get their moment in the sun! This week’s star is the Human Flying Fish, a (mostly) one-off Aquaman foe from 1960’s Adventure Comics #372.

Ex-swimming champ Victor Bragg and his marine scientist friend Dr. Krill were observing Aquaman’s success over some speed-boating smugglers when they hatched the most brilliant plan to commit crimes that the King of the Seven Seas couldn’t foil – turn Bragg into a Human Flying Fish.

One incredibly unethical surgery later and Bragg was the proud owner of an amphibious respiratory system, ready to don the yellow glider suit of Krill’s design. The Human Flying Fish swims down to an undersea expedition being protected by Aquaman and Aqualad, making off with the lost treasure it was meant to recover. Aquaman uses his telepathy to arrange for some octopi to surround the crook on the surface and is caught by surprise when he keeps going after surfacing, gliding to a waiting helicopter.

This scheme really only works without a hitch the one time, with Aquaman nearly catching Bragg the second time around and using electric eels to zap him before he can surface the third time. So ended the only appearance of the Human Flying Fish for more than a decade.

I first encountered the Human Flying Fish while reading the first ever trade paperback of DC’s 1976 Super Friends comic when I was a kid. HFF popped up in the first two issues of the series as a founding member of the Super Foes, a group of super-villains that had taken on kid sidekicks like the Super Friends’ protoges Robin, Wendy, and Marvin (Human Flying Fish is teamed up with a kid named “Sardine”). This fooled me into thinking he was a major Aquaman foe rather than a one-appearance-wonder, and I imagine it was those appearances (and their reprints) that landed him a return in the pages of 2007’s Aquaman: Sword of Atlantis #54-56 as a henchman of Vandal Savage. He hasn’t turned up again, nor was his run in Sword of Atlantis particularly memorably, so we’re unlikely to see more of him anytime soon. His 1st appearance, however, has a certain Silver Age wackiness that renders it memorably and charming and secures The Human Flying Fish the status of My Hero…for this week.