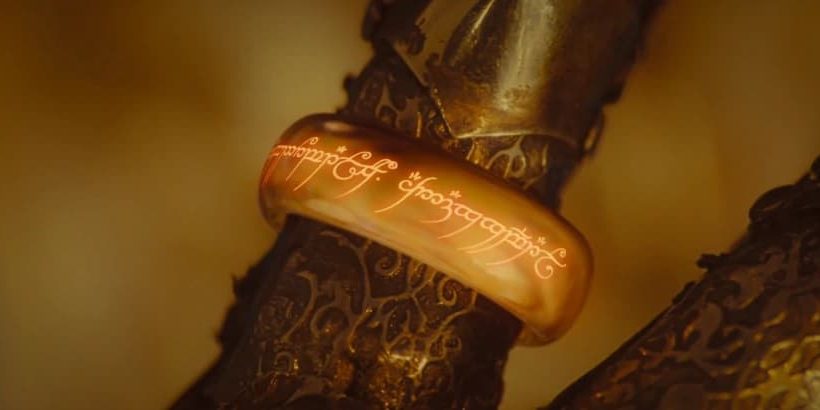 Hey there, Elves & Orcs! Amazon’s Lord of the Rings: The Rings of Power debuts today and we are abuzz with excitement for it. To celebrate, we’re launching a week-by-week analysis of the greatest Rings of Power from across pop culture. Today, naturally, we’re starting with the genuine articles from the sprawling Lord of the Rings saga by J.R.. Tolkien. 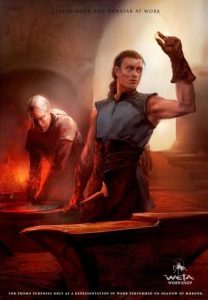 Sauron (left) getting the Rings made.

Elven smith Celebrimbor creates these twenty rings with the help of divine emissary Annatar. In fact, techniques of enchanting the rings are taught by Annatar to Celebrimbor. What the Elf prince didn’t know about his mentor is that he was lying through his teeth about his identity. Annatar was actually Sauron, a wizard (technically an Emissary of the spirits) who had broken bad. His goal was to conquer Middle Earth using the rings they would create.

Celebrimbor created three rings on his own and sixteen with Sauron’s help. Sauron himself created The One Ring to command all the others, though the three Celebrimbor created on his own were largely exempt from that control. Sauron would disperse the Lesser Rings under his control to mortals, seven to Dwarves and nine to Men. Thus he set out to conquer the world by bending two of its three major races to his will.

All of Sauron’s Rings of Power confer near-immortality upon their wearers. Since he had intended them all to be on the fingers of Elves, a naturally immortal race, this is likely an unintended side effect. However, that immortality is not without cost. We call that “The Catch”.

That said, each set of Rings had some unique quirks. They are: 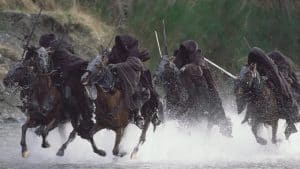 The Nazgul, only lifelong owners of the Rings of Power.

Who Wears These Rings of Power? 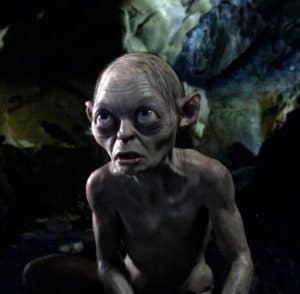 Gollum after over five centuries of holding The One Ring.

By the time of The Hobbit and The Lord of the Rings? Notably few people. Elf royalty Galadriel of Lothlórien and Elrond of Rivendell, as well as wizard Gandalf The Grey, wear the Elven rings. The Dwarven rings are effectively lost. The Nine Rings of Men are still on the fingers of their original owners. They’ve been twisted into undead wraiths with no will of their own, completely loyal to Sauron. Which doesn’t make them, now known as the Nazgul, any less dangerous.

The One RIng is, of course, the focus of much of the series’ plot. It is held by Gollum, Bilbo Baggins, and Frodo Baggins over the course of the series. We’re going to focus on what it did to Gollum. Gollum was born as a Hobbit named Smeagol. He discovered the One Ring at the age of 33, and it immediately prompted him to murder his cousin Deagol. He would ultimately die trying to reclaim the ring from Frodo at the age of 589. Hobbits usually live to be about 100. And he was vital and energentic up to the moment he died, albeit completely unrecognizable as a Hobbit. Suffice to say, The One Ring twists you in body and mind.

How Powerful Are They?

These are the baseline of power for the rest of this blog series, and boy is that a high bar. If you’ve got them all, you can build an eternal army powered by Dark Magic…as long you’re Sauron. And no one wearing any of the rings, even the “good ones, can stand up to you. Even the Elf ring that protected Lothlorien would have failed had it encountered The One Ring directly! They’re perfect for conquest, which makes sense: that’s why Sauron made them.

Are you excited Lord of the Rings: Rings of Power? What did you think of the premiere? Let us know below or hit us up on social media @b2pcollect. If you’ve got yourself a collection of movie memorabilia, like posters or toys or other collectibles, we’re here to help when you’re ready to sell it!

Come back next Friday for another examination of pop culture’s mightiest Rings of Powers!