Creepy Classics #5: I Married a Monster from Outer Space 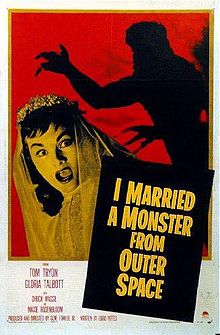 A year or so back I was having a chat with my boss about the great sci-fi movies from the 1950’s. All the classics came up during the conversation along with one that I had never heard of. That movie was I Married a Monster from Outer Space. My immediate thought was that the title was awesome and I had to see it, so I did.

I Married a Monster from Outer Space is a sci-fi movie from 1958 in the vein of Invasion of the Body Snatchers. The movie is centered on newlyweds Marge (Gloria Talbott) and Bill (Tom Tryon). Shortly after the wedding Marge notices that Bill is detached and acting differently than the man she fell in love with. As time goes on she begins to notice that more and more people in town are starting to act strangely. It’s up to her to figure out what’s going on.

I Married a Monster from Outer Space was actually premiered in September of 1958 as a double feature with The Blob, starring Steve McQueen. Its full release was in October of 1958. Unfortunately, the movie was widely brushed aside by most movie fans and critics due to the wild and oddball title. Luckily, years after the initial release of I Married a Monster from Outer Space, critics and sci-fi fans began referring to it as a lost gem of 50’s science fiction. It’s now considered among the best the era had to offer by some, including me. It had gained enough of a cult status to get a television remake in the 1990’s on the now defunct UPN network titled, I Married a Monster.

After searching high and low for a copy of this movie, my expectations had been built quite high. It didn’t take long for I Married a Monster from Outer Space to kick things into gear, and it moves at a pretty nice pace the entire time. I thought the acting and plot were good and I dug the special effects, though they were pretty hokey at some spots. Overall this is one of my favorite sci-fi movies, and that’s not restricted to just 1950’s sci-fi. It’s a fun ride that I’m glad I can take whenever I feel like it. It’s a shame that the title prevented it from being as well-known as some of the other classics from the era.

If you haven’t seen I Married a Monster from Outer Space, get on it. It isn’t easy or all that cheap to get a hard copy, but there are multiple options for you to purchase or stream a digital copy. I highly recommend this movie to anyone that’s into classic sci-fi. I honestly don’t think you’ll be disappointed.