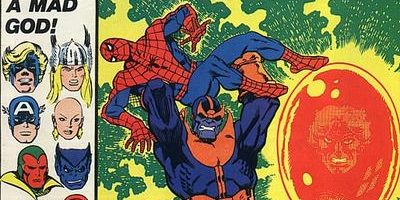 Okay, I decided to be nice and not make everyone wait for two weeks, for the second half, of this continued RETRO REVIEW.  For those looking for my regularly scheduled Fabulous Find column, well, check back next week, as I’ve pushed it back so that I can offer up this column instead.

So without further ado, I offer up Marvel Comics’ Marvel Two-In-One King Size Annual # 2, from the summer of 1977.  This is the second part of the story that began in Avengers Annual # 7.  If you missed it, please check out last week’s RETRO REVIEW, found here: https://gobacktothepast.com/retro-review-avenger-annual-7/.  If you didn’t read it, please take a moment and check it out and come right back here for the second part.

Okay, everyone’s back?  Then let’s get this show started!  Marvel Two-In-One Annual # 2 also showcases a nice Jim Starlin cover (He provided both pencils and inks, by the way)!  And here’s that cover: 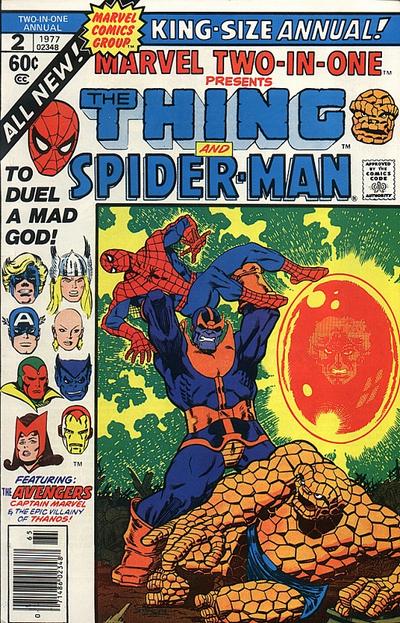 For those of you not familiar with Marvel Two-In-One, it showcased Ben Grimm, The Thing, from the Fantastic Four, in adventures where he teamed-up with other Marvel Universe characters outside his regular gig in the Fantastic Four.  Needless to say, this annual showcased a Thing & Spider-Man team-up, as well as, guest-starring the Avengers!

The story is entitled; “Death Watch!” and it was written and laid out by artist, Jim Starlin, then Joe Rubinstein provided finished pencils and inks!  The story opens with Peter Parker (Spider-Man) dreaming about the action previously shown in Avengers Annual # 7, but it’s not a true dream. Actually it’s a mental projection from the sometime Avenger, Moondragon!  It fills in Peter, as well as, the reader of what has already happened in the previous annual.  Plus it goes on to reveal additional information that took place immediately after the events found in Avengers Annual # 7!  Where Thanos returned to defeat the Avengers and take them captive on his space ship.  He also takes Adam Warlock’s Soul gem for his own nefarious ends!

Peter awakens, dons his Spider-Man togs, and goes in search of someone with access to a space ship, i.e. the Fantastic Four!  Ben is alone, but agrees to join Spider-Man.  They fly out into space and discover Thanos’ giant ship.  They are brought aboard via a tractor beam and Spider-Man and the Thing are forced to battle Thanos’ hordes!  Spidey and the Thing are defeated and before Thanos in the presence of the Avengers being held in statis.

For some silly reason Thanos decides to go mano-a-mano with Spider-Man and the Thing.  He easily defeats Ben, but Spidey flees and eventually is able to free the Avengers, where upon a real donnybrook ensues between the Avengers, with the help of the Thing against Thanos!  Thanos again wins and Spider-Man feels something drawing him to a glass globe with Warlock’s soul gem enclosed.

He breaks open the globe and  the “Ultimate Avenger”, Adam Warlock is released!  Quickly Warlock, or his spirit (?) turns Thanos into solid granite!  That pretty much wraps up the story, except for a two page epilogue, where we see Captain Marvel and the Avengers on a lonely planet honoring a grave, marked; Adam Warlock, God Slayer, Savior of Two Worlds, and Tormented Soul. May he now be at Peace!  And then the reader is given one more glimpse inside the soul gem (?)((And what exactly happened to it when Spider-Man broke the globe containing it?)) where we see Adam, Gamora and Pip living in a paradise, without strife or pain!

Then once again, we view the granite Thanos, forever turned to stone, never to wreck havoc in the Marvel Universe again!  Yeah, right!  As we all know both Warlock and Thanos would be back and welcomed by this comic book reader!  But that’s for another time.  Take care and be seeing you…