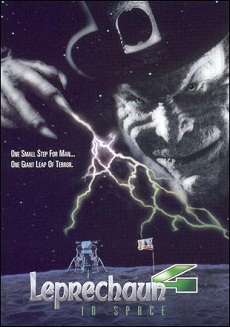 Last week I left you guys with a brief synopsis on the experience my friends and I had watching the first 3 movies in the Leprechaun franchise. It started well and just kept getting better. With the first 3 entertaining us to no end, we were very much looking forward to the rest of the campy franchise starring Warwick Davis. These are the grisly details.

1997 saw the release of Leprechaun 4: In Space. This movie takes place in the future, and as the title says, the leprechaun is in outer space. Sounds good? No. It sounds great. Just like every bad idea you’ve ever had it sounds good, but it doesn’t turn out good. This movie is about the leprechaun trying to marry an alien princess so he can kill her father and become a rich king. It was absolutely terrible. The third movie was phenomenal and this one was a major fall from grace. To add insult to injury, the leprechaun didn’t even rhyme! That’s like Tony the Tiger holding up a bowl of Frosted Flakes and saying, “Eh. They’re pretty good.” 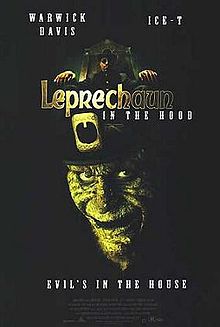 The fifth movie in the series, Leprechaun: In the Hood, came out in the year 2000. Space was a huge failure so they brought the lil’ guy to the ‘hood. This is the hardest one for me to talk about. 4 was so bad that I honestly think it tainted our experience with In the Hood. This movie has Ice-T playing Mac Daddy alongside the leprechaun, which is awesome. 20 years prior to the main story, Mac Daddy stumbles upon the leprechaun and his treasure. After a brief altercation he ends up with a magic flute which gives him power over people. With this he gains a vast fortune. Through an unfortunate series of events, the leprechaun is set loose and he wants his flute back. There were some laughs, but most of the characters weren’t that good, save for the leprechaun and Mac Daddy. I’m not sure I’ll ever go back and watch it again, but, never say never. 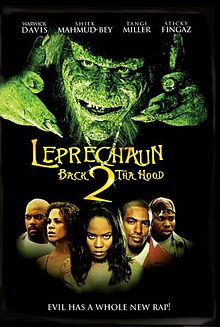 The sixth and final installment in the franchise came out 10 years ago, in 2003. Leprechaun: Back 2 Tha Hood was unconventional, but good. He didn’t rhyme and he didn’t talk about his missing gold that much. He did, however, have the same amount of murderous desire in his heart and a fondness for recreational drugs. This movie was actually pretty funny. It didn’t try nearly as hard as the previous one, and it felt like it was going back to the franchise’s bread and butter. The ending was a bit drawn out and some of the blood was painfully obviously digital, but overall this wasn’t a bad movie. It’s definitely worth a viewing.

The Leprechaun series is a tongue-in-cheek, campy and absurd set of films that reached soaring heights and deep, cavernous lows. It’s not for everybody, but I went for it. From a half serious proposition sprang a journey that I would probably have not taken otherwise. Did I enjoy the entire series? No. Do I regret it? Hell no. Was it a good way to prepare for St. Patrick’s Day? Probably not. It was a fun time shared with my friends (for the record my buddy Baker was the only one that stuck it out through all 6 with me) and I can’t wait for the next series we decide to plow through.