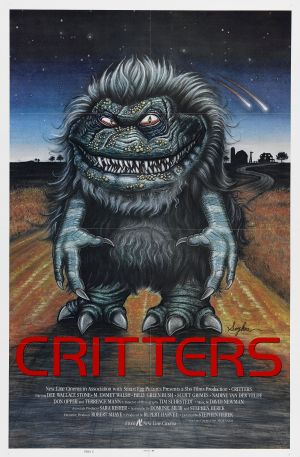 Picture it: January 10th, 2013. It was unusually warm for a winter day. I’m talking to my friend Andy and he informs me he’ll be watching a movie with our friend Baker later that evening. What movie would they be watching? I’m glad you asked. I tagged along and for the first time in my life I saw Critters.

Critters is a wild romp about 8 tiny, furry creatures called Crites that escape from a space station. The guy that runs the station sends a couple of bounty hunters after them and that’s when things start to get awesome. Naturally, the Crites land on Earth because they are hungry little dudes and they aren’t very picky. I genuinely feel a little disappointed that it took me this long to see this movie. The story was fun, the creature design was awesome and it was cool seeing a ton of actors and actresses that I recognized, including Dee Wallace.

This movie came out in 1986 and is one of the best of that year. By 1986 most horror films were really embracing the campy aspect of modern horror and Critters ran with it. This is one of those rare movies that most people go into thinking they’ll like it ironically, but will end up genuinely liking it. If nothing else it’s awesome to see those little dudes be such big bastards. They are mean spirited and it’s hysterical. There’s one scene in particular involving a Crite and a bike that cracked us up. Once this movie gets going it doesn’t slow down for anything. Whether it’s a scene involving a Crite or people from town there’s always something going on that’s going to hold your attention.

There’s not really much I can say about it other than telling you repeatedly how awesome it was. It was good enough to spawn 3 sequels (Leonardo DiCaprio and Angela Bassett appear in the series) and we are pretty pumped to see the rest of the series. I will definitely be adding this movie to my collection and think everyone should see this movie at least once. Hell, Raphael of the Teenage Mutant Ninja Turtles even saw it once (he’s seen leaving a theatre that was showing it in the first movie)!

Critters (PG-13) is available to rent or buy on DVD or digitally.