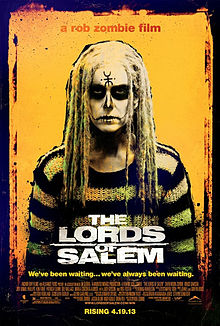 Anyone who knows me knows that Rob Zombie films and I don’t agree. I’ve seen all 4 of his other feature films, House of 1,000 Corpses, The Devil’s Rejects, Halloween and Halloween II, and they have all failed to impress me. I had no intention of seeing this movie because of that, but then I heard that Mr. Zombie announced his retirement from horror films. I’d traveled this far with him, so I might as well see his supposed final contribution to the genre. It has extra drawing power to the nifty little cast he assembled, too. Dee Wallace (Critters), Ken Foree (Dawn of the Dead), Patricia Quinn (Rocky Horror Picture Show) and Meg Foster (Masters of the Universe) all appear in The Lords of Salem, among others.

The Lords of Salem is about a radio DJ, Heidi Hawthorne, and her unknowing role in a plot set in motion by a coven of witches in the late 1600’s. The plot was slow moving and often got lost in moments that I felt were unnecessary and at times confusing. Heidi and her two co-workers, Herman Salvador and Herman Jackson, are co-hosts of a radio show that features music and interviews. While Herman Jackson (Ken Foree) conducts himself like a professional, Salvador and Hawthorne act like grade school children that just learned a new curse word. I don’t know if Zombie wanted the audience to dislike our main character, but I sure did. There was nothing really going on with the Heidi character that made me empathetic toward her to make up for the annoyances I suffered during her scenes at work. Between my lack of compassion for the main character and the seemingly random scenes, one would think I didn’t enjoy this movie. They wouldn’t be completely right.

The Lords of Salem did fall short with some pretty important elements, but it did succeed in other areas. The Lords of Salem was gorgeous at times. The set design, colors and imagery were some of the best Zombie has ever given us and he deserves credit for that. There are shots in this movie that would make amazing posters. The music provided by John 5 of Marilyn Manson fame was spot on and Zombie made an excellent choice in getting him to do it. Zombie often set an eerie mood with a restraint that he hasn’t shown before. In the past he would use dirt, grime and gore to make things creepy. In The Lords of Salem he called upon the classic Italian horror films from the 60’s that no doubt influenced him, and it worked wonders.

The Lords of Salem can be summed up with an analogy. The Lords of Salem is like a stereotypical cheerleader. It’s pretty, but it isn’t that interesting. Seeing the progress Rob Zombie made with his direction and imagery was great, but the sub-par story left me wanting. Rob Zombie has written and directed all of his films. It makes me wonder what Zombie could do with a movie written by someone else. The Lords of Salem clearly shows Zombie’s progress and potential as a director, but again highlights his weakness as a writer.