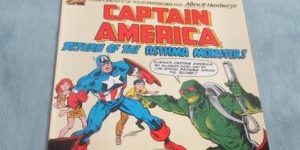 Welcome back to Hammer Drops, where the experts at Back to the Past share our hard-earned experience with you! Today, we’re looking at a few lots from recent auctions that all have one thing in common: they were free giveaways when they were released.

Those facts are why more modern stuff, produced after the rise of the collector market, doesn’t hold value nearly as well: it’s not hard to find pristine specimens of 90s comics or Star Wars toys or what-have-you. It was the ephemeral nature of old comic books and toys that eventually made them valuable. So how can you recapture that nature in the present?

How about with comics that were meant as promotional tools, complete with space to be stamped or stickered with a store’s logo? Or perhaps a Public Service Announcement comic that would have been given out by doctor’s offices to predominantly disinterested children rather than relatively young adult collectors? Those would recapture the cheap and disposable nature of the early comics, at least potentially.

The Teachable Moment: There Can Be Value in the Ephemeral

If something was not designed to be kept around, specimens that were kept around develop some degree of rarity. Rarity doesn’t always correlate to value – a newspaper about the JFK assassination is indeed rarer than this week’s Metro Times, but is worth about as much and has fewer useful articles – but a rarer item that has a specific audience (like a Batman comic) is off to a promising start.

Scott pointed out an important caveat on these lots:  freebie reprints don’t generally accumulate value in this way. Reprints of key issues and surprise hits go for less because they specifically reproduce a valuable comic and therefore there’s no reason to pay big money for them when you can spend it on an original. We would also be remiss if we didn’t point out that the $1200 for Star Wars Tales: A Jedi’s Weapon FCBD Special works out to about $20 per copy – a princely but not exorbitant sum.

Even so, you can get lucky: the Batman Beyond Free Origin Special that has been making frequent auction appearances of late, all for $120-170, is just a reprint of Batman Beyond Vol. 1 #1. At the time that issue originally came out, Batman Beyond was just an oddball new cartoon and serious collectors weren’t generally interested in animated tie-ins. Today, Batman Beyond is a fan-favorite (with the character’s most recent series having ended in December 2020 at #50) and those once-ignored tie-in comics are rightly recognized as key issues. Ergo, the issue we’ve been selling ticks a few boxes that suggests value:

That, particularly point two, is why that issue can sell for north of $100 while Ultimate Spider-Man #1 FCBD edition goes for under $10. Does all of that sound somewhat confusing and contradictory? It can indeed be that way. If sorting out your collection for sale seems like it’s too time intensive, it never hurts to check with your friends here at Back to the Past about having us handle that for you. And if you feel up to the challenge, keep following Hammer Drops every two weeks for more tips and tricks!