1 Out of 5 – Would Recommend: Hoop Squad 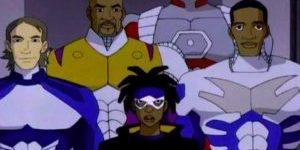 Welcome back to 1 out of 5 – Would Recommend, where we’re taking a detour into the combined DC/Milestone Universe in honor of the debut of Young Justice: Outsiders (and with it the return of Static, Icon, & Rocket to the small screen, not to mention the “other media” debut of Hardware). We’re watching Static Shock season four, episode seven: “Hoop Squad”.

Static and his sidekick Gear are in Los Angeles to see the NBA All-Star Game and meet basketball superstars Karl Malone, Yao Ming, Steve Nash, & Tracy McGrady. They quickly learn that their sports idols are also heroes off the court too: they are the government super task force known as the Hoop Squad (codenames Pulverizer, Center Force, Point Man, & Spin Drive, respectively), inevitably leading to superhero team up.

The usual production team behind Static Shock, who had increasingly tied the show to the existing DCAU/Timmverse starting with a Batman crossover in season two. Two episodes (including the premier) of season four featured team-ups with DCAU heroes, Batman Beyond & Green Lantern. This episode was meant to be a poorly-disguised pilot episode for the Hoop Squad, much like Star Trek’s “Assignment: Earth” or Married…With Children’s “Radio Free Trumaine”. It co-exists with the likes of Justice League Unlimited just he same.

…I can’t rightly recommend you watch it, but I do recommend you picture the existence of the Hoop Squad throughout major events in the DCAU. Thanagarian invasion? Karl Malone fought in it. The Apokilips invasion? Presumably, Yao Ming was fighting off Parademons in L.A. just off screen. Amanda Waller & Project Cadmus? Probably funded the NBA (not the basketball one).