A Tale Of Two Copies (or “Why Condition Matters”) 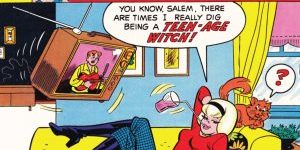 Welcome to Hammer Drops, where we discuss the how’s and why’s of interesting or unexpected prices we are seeing for items sold in our auctions! This week, we’re looking at Lots 65 & 67 from our May 16th session.

Both lots were copies of Sabrina The Teenage Witch #1 from 1971, the inaugural issue of Sabrina’s first ever ‘self-titled’ series. It launched nine years after the character’s debut and in the midst of her first animated series.

The character has gone on to be one of Archie Comics’ most recognizable characters, thanks in no small part to the three TV movies and seven season sitcom starring Melissa Joan Hart in the 1990s. There’s also a pretty popular, albeit considerably darker, Sabrina series on Netflix right now.

The Teachable Moment: Condition is Key

The only difference between lots 65 & 67 is condition. Both are near the top end of the grading scale, sitting by our estimation comfortably in the “Very Fine (VF)” range. However, even as lot 65 was just inside the VF range, lot 67 presents *almost* Near Mint (NM) condition – about as good as a comic touched by human hands can be. This resulted in lot 65 selling for $85 while lot 67 sold for $190 – that bump in condition (represented by the addition of a “+” to its “VF” grade in our catalog) more than doubled its value to our bidders!

See you next time for another installment of Hammer Drops!