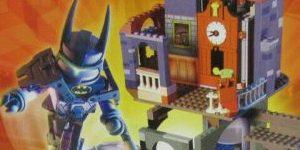 Welcome back to Consigned, Cool, & Collected, where we dive deep on some piece from one of our consignments that includes a certain additional “cool” factor! Today, we’re digging into the history of the C3 Batcave construction set from Art Asylum.

Before Superhero LEGOs, There Were Minimates

While you wouldn’t know it from looking at their modern line, the LEGO company offered no licensed sets (I.E, directly based on TV, movies, etc.) until 1999, when LEGO Star Wars debuted. It would be two more years before a second license, Harry Potter, was added, and Spider-Man received sets to tie-in with his first outing on the silver screen in 2002. What we’re getting at is that licensed sets were few and far between at the turn of the century.

Meanwhile, collector-focused toymaker Art Asylum debuted their Minimates line in 2002. Blocky miniature figures with 14 points of articulation, they take clear inspiration from construction set minifigs while being singular collectibles. Unlike the LEGOs of the day, basically all Minimates were licensed – starting with then-buzzworthy properties like Dark Angel and Crouching Tiger, Hidden Dragon before adding a lucrative Marvel license in 2003.

With the rapid success and expansion of the Minimates line, Art Asylum teamed up with a company name Play Along in 2004 to fill in the gaps LEGO was leaving in the licensed construction set market. The result was C3 (cee cubed for “create, construct, customize”), which also marked the creation of the earliest DC Comics Minimates. Based on Batman comics as well as the newly debuted Justice League cartoon, seven sets were part of the debut wave.

The largest and most ambitious set in Wave One, and indeed the entire line, was the Batcave. Topped by Bruce Wayne’s study, it featured a Grandfather clock door that lead into Costume Vault and a staircase to the Bat-Computer at the bottom – all designed in a surprisingly accurate encapsulation of the Batcave of the era.

The next two waves of C3 sets focused on smaller and smaller vehicles, with no new location sets, until the line was phased out. Soon after, Art Asylum’s agreement with DC was amended to allow their characters to be made without accompanying sets. Minimates never dabbled in construction sets again and co-exist peacefully with LEGO’s superhero construction sets and minifigs to this day.

But we’ll always have that C3 Batcave! And its boasted compatibility with other construction sets (read: LEGO) means you could construct a very elaborate custom Batcave with C3 stuff as the centerpiece. And that’s all for now, come back in two weeks to see something else Consigned, Cool, & Collected!

Do you have something fascinating we could bring to the collectibles market? Contact us today!