Camp Blood…Nope, Not That Camp Blood 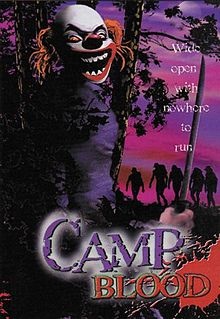 Camp Blood is a direct-to-video slasher film from 1999. It was written and directed by Brad Sykes and stars Jennifer Ritchkoff, Michael Taylor, Tim Young, Bethany Zolt, Courtney Taylor and Shemp Moseley. It spawned two sequels, Camp Blood 2 (2000) and Within the Woods (2005).

I’ve had a copy of Camp Blood sitting at my house for quite some time. This weekend I finally sat down and watched it. Oh, boy. This was…something. I popped the DVD in and immediately noticed that the DVD was literally just a VHS transfer. I’ve seen enough low budget horror films to know pretty much what I was in for. The basic idea is that there was a camp, Camp Blackwood, and some bad stuff happened there. The local population unoriginally started calling it Camp Blood (which is the exact same thing they started calling Camp Crystal Lake in the Friday the 13th series) and many people who went there were never heard from again.

A small group of friends (2 couples) decide that they’re going to get out of the city for a while and spend some time camping and they just happen to be going to Camp Blackwood. They get a little lost and stop to ask a weird, local old man for directions, who then warns them to stay away from the camp (just like the weird old man in Friday the 13th), but they go anyway. They meet up with a guide they hired who’s a rough around the edges woman named Harris. She takes them through the woods and they camp for the night, but that’s when the killing starts. The deaths are your typical low budget slasher film deaths and there’s not much to say about those. There is one fight scene between the killer and one of the main guys in the film, which blew my mind. The killer is chasing him with a machete and he’s running away, armed only with a knife. The victim is jumping around and dodging all of the attacks, and has plenty of opportunities to stab the guy, but he decides to jump around some more. I’m not talking about split second chances here, either. There were multiple times where the killer attacked, missed and was in no position to dodge, block or counterattack. The dude would have had to try to miss the killer, that’s how close he was. Yet, horror movie logic dictates that he just keep playing the role of jumping around jackass.

The movie rolls on and the body count slightly rises, but we have one more cast member still alive. Tricia is fleeing from the killer who is wildly swinging his machete at her, in a scene oddly familiar to the one at the end of Texas Chainsaw Massacre…hmmm. The crazy old man shows up, revealing that he’s working with the killer and a ridiculously bad final fight takes place. The clown mask wearing killer is revealed to be their guide, Harris, and Tricia is shocked at this revelation. My favorite part of this movie was the origin of the clown mask. Are you ready for this? It just happened to be sitting on the passenger seat when he decided to kill his cheating lady and her lover.

Was Camp Blood the worst movie I’ve ever seen? Nope. That doesn’t mean you should seek this out, though. You’d probably have more fun doing anything else.