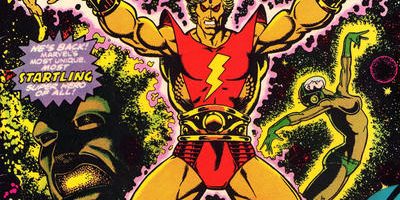 Well when it rains it pours.  First vacation interrupts my column and now computer problems cause a major slow down and eventual fix!  But because of this, I’m running yet another reprint.  But unless you’ve been here from the very beginning of my columns, I doubt you’ve read this one!  So without further ado …

Hi again, this week I’m reviewing Strange Tales Featuring: Warlock # 178, a comic book from Marvel Comics, cover dated February 1975.  The first thing we notice is a great cover by Jim Starlin, stating “He’s Back! Marvel’s most unique, most startling Super Hero of all!”. 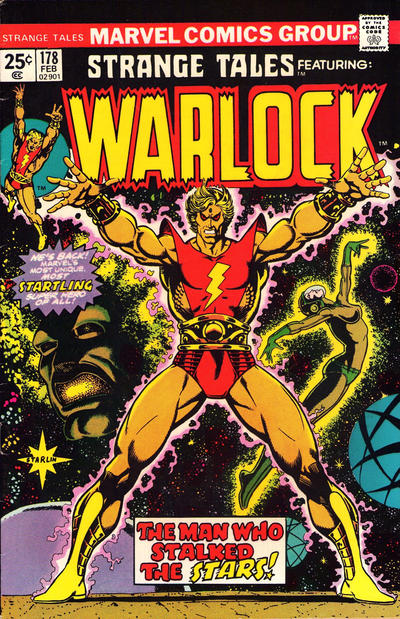 Jim Starlin had only recently joined the ranks of Marvel artists and already he is listed as the writer, penciller, inker and colorist for the book.  Quite the change of the norm at Marvel, where not many people got the opportunity to do it all on a book.  Besides Jim Steranko, I can’t think of another one at this time!

Starlin does a great job of bringing new readers, as well as, long-time Marvel readers up to speed on the Warlock saga.  He uses a character, Sphinxor, never seen before, or after this, to recount Adam Warlock history in the four pages after the splash page.  Sphinxor tells of Adam’s origin in the Hive, when he was only known as Him, which occured in Fantastic Four # 66 & 67. He also tells of his battle against Thor in Thor # 165 & 166. Then he recaps his encounter with the High Evolutionary and how he became the savior of Counter-Earth and his epic battle against the Man-Beast inMarvel Premiere # 1 & 2.  Finally he touches base with his short lived title, Warlock # 1 – 8 and his final appearance in Hulk # 176 – 178.

Then quickly the scene shifts to a barren planetoid in the present with three “hunters” pursuing a woman.  She trips and suddenly Warlock appears standing over her!  Quite the dramatic entrance for our hero.  She quickly explains that she has crossed a dozen galaxies and searched a thousand worlds seeking him.  Warlock battles the three hunters but fails to save the girl before the three teleport away.

Warlock then is forced to use his Soul Gem to re-animate the girl from death, so that she can tell her story.  She reveals the reason she was searching for Warlock, and speaks of the Hell that is taking place across the universe.  The rise of the Universal Church and it’s leader, The Magus!  Somehow, The Magus imposes himself through the girl and appears before Warlock.  He reveals to Adam the secret of the Magus, which itself is a further mystery.

The name Magus in Latin means wise man, or magician, or warlock!  In a nutshell, Magus reveals that he is Warlock, that they are one and the same being!  Wow, talk about a big reveal, and in the very first story!  I for one was hooked thirty-five years ago when I picked up this book off the stands.  So if you’ve never read Warlock’s story, I definitely recommend that you pick up the Starlin penned and drawn books that started here in Strange Tales back in 1975.

The whole story has been reprinted a number of times, but Marvel Masterworks, Number 119, in this fine series, covers Strange Tales # 178 – 181, then picks up the story in the continuation of the revied comic book, Warlock # 9 – 15, plus a couple of other appearance in The Avengers etc tells the whole tale!