Cars on the Moon: The Lunar Roving Vehicle 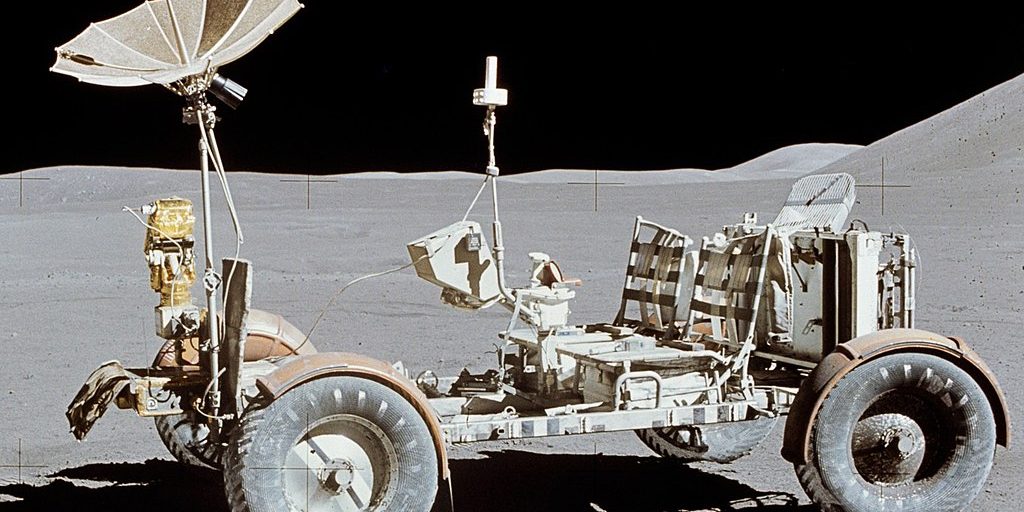 Welcome back to Consigned, Cool, & Collected! Every week, we here at Back to the Past stop for a moment to share the histories behind the nifty stuff we handle every day. Today, we’re having a look at Lot #158 in our November 6, 2021 auction session: a Space Voyagers Lunar Roving Vehicle toy vehicle! 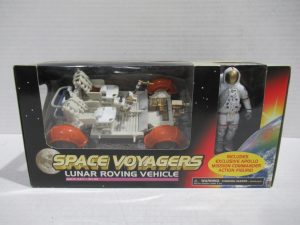 The United States’ National Aeronautics and Space Administration first landed human beings on Earth’s moon on July 20, 1969. The astronauts on the mission successfully returned to Earth on the 24th, an outcome that had been far from a sure thing. The Apollo 11 mission remains one of the most impressive scientific and technical achievements in the history of humanity.

Which is probably why it overshadows the five subsequent trips the U.S. took to the moon. The Apollo 13 mission  is fairly well-remembered, but that’s because it near-fatally failed to reach the moon and the difficult rescue of its astronauts was as much an achievement as landing successfully. There are two notable exceptions to pop cultural amnesia over the later Apollo missions. The first is astronaut Alan Shephard hitting golf balls on the moon during the Apollo 14 mission. The second is the Lunar Roving Vehicle, or LRV, which debuted during the Apollo 15 mission.

The idea for a lunar vehicle dates back to the earliest days of the American space program, although those earliest thoughts were much more elaborate. The hope was for a multi-ton vehicle that could serve as equipment hauler and habitat. While an excellent idea in theory, the practice turned out to be rather beyond the the reasonable capabilities of American rocketry at the time. It was, however, still considered vital to expand astronauts exploration range and sample-gathering capacity with a vehicle. 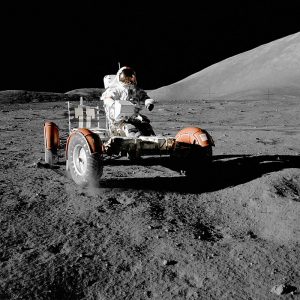 The last LRV in action on the moon.

The Brown Engineering Company spent 1964 & 1965 developing a design for what would become the Lunar Roving Vehicle. NASA approved the project for production in 1969, settling on Boeing (with some mechanical help from General Motors) to build it. The end result was a 0.25 horsepower, battery-powered vehicle with a fifty-seven mile range. It weighed just 460 pounds here on Earth, 75 on the moon. For comparison, the average golf cart weighs about 950 pounds (or 157 pounds on the moon). It carried with it hand tools, a power drill, back-up life support, laser-ranging equipment, and a color television camera. It marked a massive advancement in both the astronauts’ ability to gather samples as well as NASA’s ability to document the missions.

The first LRV touched Lunar soil on July 31, 1971. It performed excellently on its first mission, and the next two successive missions each carried one. They weren’t without problems, however. As the box of this toy relates, the LRVs had an unfortunate tendency to lose a fender fairly easily. In the dusty, airless setting of the moon, with caused a fairly major problem. The Apollo 16 team just lived with their equipment being covered in dust. The Apollo 17 team effected a repair with clamps, duct tape, and paper maps. It worked, and the maps that made up the makeshift fender are still on display at the National Air and Space Museum. Since Apollo 17, neither the U.S. nor anyone else have landed a human being on another celestial body. As such, the three manned lunar rovers left on the moon by the Apollo missions are the only ones to successfully leave the planet. 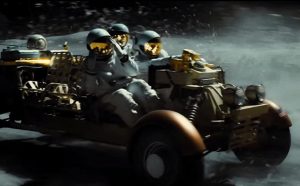 A fictional successor to the LRV seen in Ad Astra.

Despite only three of them ever seeing use, the LRV produced a striking image for American popular culture. While some works of fiction choose to create vehicles more in line with NASA’s early ideas (including both Armageddon and The Martian), vehicles based on the real LRV have appeared in movies, TV shows, and video games. My personal favorite example, owing to many hours spent playing the game as a kid, is the vehicle of astronaut Bob O. in the late 90s vehicular combat video game Vigilante 8: 2nd Offense. The Brad Pitt lead sci-fi flick Ad Astra featured beefed-up passenger versions of the LRV as the vehicle of choice for trasnportation between lunar settlements, in keeping with its harder science fiction edge. James Bond, the Sean Connery version, drove a lunar lander in Diamonds Are Forever…but it was a fantastical one that’s still here on Earth in-story.

The LRV is instantly recognizable, but generally restricted to educational toys like this one and model kits. The American space program is still a proud piece of our nation’s history, and continues to capture the imaginations of children and adults alike to this day. That gives toys like this, and the whole of the NASA memorabilia collection it came with, value with collectors. If you’ve got a historical collection like it that you’re looking to sell, Back to the Past is here to help you. And if you want to accumulate a collection like it, keep an eye on our auctions in coming weeks!