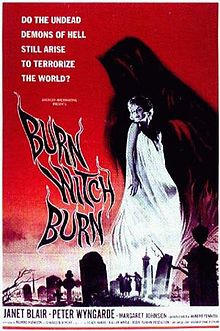 Burn, Witch, Burn is a black and white British horror film from 1962. It was originally titled Night of the Eagle in the UK and Europe, and was changed to Burn, Witch, Burn for the US release. You might not realize it, but this movie is about witchcraft! I won’t lie. I have a thing for old movies about witchcraft. They just seem to have a really solid Halloween feel for me.

This movie was co-written by Richard Matheson, the same guy that wrote or co-wrote either the script or screenplay for classic Vincent Price films House of Usher, The Pit and the Pendulum, Tales of Terror, The Raven and The Last Man on Earth. That should give you a pretty good idea of the quality of this movie. The 60’s and 70’s produced a lot of films based around witchcraft and Satanic cults. A lot of these movies, while entertaining, load up on clichés. The nice thing about this one is that it avoids using a lot of witchcraft clichés. There are no bubbling cauldrons. There are no broom riding, pointy hat wearing, black clad women in this movie. The simplicity of this movie is what makes it good.

The movie is centered on a married couple, Norman and Tansy Taylor, whose lives are being affected by witchcraft. Peter Wyngarde plays the role of Norman and Janet Blair plays the role of Tansy. Wyngarde doesn’t do a bad job, but he’s a bit overshadowed by the performance of Blair. When she was on screen I found it hard to look away. She brought a quiet intensity to the movie that was very much appreciated. A lot of movies that are as old as Burn, Witch, Burn feel very dated when watched nowadays, but I didn’t get that feeling with this one.

Burn, Witch, Burn is a movie that not many people have heard of, let alone seen. It’s one of those “forgotten classics” that horror fans love to come across. It’s not going to be up everyone’s alley, but if black and white horror movies about witches from 1962 are your thing do not pass this one up.

Burn, Witch, Burn is available on DVD and is streaming on Netflix.