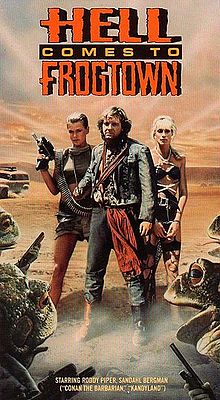 If you read the description and expected something along the lines of The Godfather or Citizen Kane you should get your head checked. When I got the synopsis of Hell Comes to Frogtown I was expecting a bizarre and thoroughly entertaining sci-fi/action movie. That’s what I got. People have had some not so nice things to say about this movie, but those people obviously lack common sense. They forgot about the Piper Equation. Everybody knows that the level of awesome of a movie is directly correlated to the amount of “Rowdy” Roddy Piper it has in it. That being said, this movie was friggin’ awesome!

Released in 1987, this movie is set in an alternate reality when nuclear warfare has gotten out of hand. Most of the countries have severely depleted populations and many of the survivors are either sterile or frog-like mutants. There’s an arms race going on, but it’s not like the kind you’re thinking of. Countries all across the world are trying to get fertile men to impregnate as many fertile women as possible so they can rebuild their armies. Roddy Piper plays the titular character, Sam Hell. I really could just stop right here. That should be reason enough for you to watch this. If that isn’t enough, however, the character of Spangle is played by Sandahl Bergman. You might know her as Valeria from a small film from 1982 called Conan the Barbarian. Sam Hell is fertile and Spangle’s job is to find him some women fit for breeding. Awesome.

It’s pretty much as good as you’re imagining it. It’s bizarre, over the top and absolutely insane. This is one of those movies that gets crapped on by people all the time but in reality it’s just a ton of fun. It didn’t win any Academy Awards, but it didn’t really need any. This is one of those movies that will be infamous for all time and loved for what it is by few, which is kind of a shame. Not every movie needs to be taken seriously. Sometimes a movie can just be fun. This movie is just a ton of bizarre, frog filled fun.

While it wasn’t a box office hit, this movie did make a nice sized profit. Logic would dictate that people saw it and liked it. I think if you like bizarre movies you’ll like it, too.

Hell Comes to Frogtown (R) is available to rent or purchase digitally or purchase on DVD.