A few weeks back, as you’ll recall, I talked about the top 5 titles being published by Marvel right now. Or Marvel NOW, right? Whatever. As Marvel has taken the center of the mainstream stage with their multiple relaunches, DC it seems has been all but pushed off to the side. But that’s not to say that there aren’t some buzzworthy comics still coming from the New 52, or what’s still standing from it, anyway. To, to be fair and balanced, or as fair and balanced as that phrase typically seems to mean, I will tell you my DC Top 5: 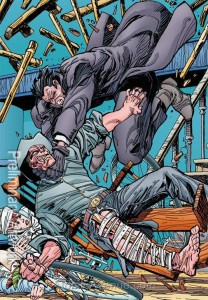 5. All-Star Western (Palmiotti / Gray / Moritat)
Wait; one of the best New 52 titles is a western? Yes; yes it is. When DC restarted their entire superhero line over a year ago, they wisely threw in a few non-superhero titles for good measure, and this is one of the best. This comic features Jonah Hex, an obvious choice, teamed up with Doctor Amadeus Arkham, a not-so-obvious choice. And yes; it’s that Doctor Arkham; of the Gotham Arkhams. And yes again; it’s set in Gotham. A fun choice that lets fans see how Batman’s hometown was back in the late 19th century. Even some of Bruce Wayne’s ancestors are involved. But what’s best about this title is that Jimmy Palmiotti and Justin Gray get Jonah Hex; a Hex that’s ironically largely untouched, unlike many of the DC characters in the post-New 52 era. It’s grim, gritty, dirty, and everything Hex. DC didn’t need the New 52 to launch this book, but hey; any excuse for an enjoyable comic is a good one. 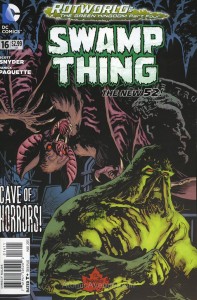 4. Swamp Thing (Snyder / Paquette)
While most of the attention given to Scott Snyder is for his work on Batman, not to be underestimated is his relaunch of Swamp Thing, which features both Swamp Thing and his alter-ego, Alec Holland. You’ll have to read it if you don’t understand what exactly that means. It’s good to see the character back in print, and probably especially good for old-timers who never really warmed up to the Vertigo-ized version, where the character existed for quite awhile. It’s a welcome, back-to-basic approach that reintroduces Swampy back into the DCU, although the lingering Rotworld storyline has kind of prolonged things a little longer than necessary. What’s most attractive about this comic, though, is Yanick Paquette’s beautiful renderings of lush, green flora and forestry that is the very foundation of the character’s world. Even if readers don’t go for Snyder’s story, the art is worth the price by itself. 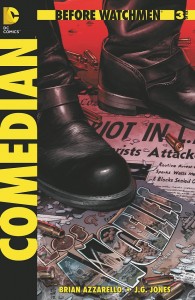 3. Before Watchmen: Comedian (Azzarello / Jones)
Before Watchmen?! That’s not a New 52 title, I hear you say! Then hear me say: so what? The fanfare that preceded this and all the other BW titles was much louder than what’s come after, but in truth, collectively this line of comics; a series of comics that many, myself included, felt didn’t need to be done; have actually been pretty strong and well-told. And this one leads the pack, as one of comics’ historically best writers of twisted characters, Brian Azzarello, takes on one of comics’ most historically twisted characters. And while creator Alan Moore made The Comedian’s background clear enough in the original Watchmen, Azzarello sharpens it and embellishes it, intertwining the character’s origins with real-life figures and events, with the same deftness that Moore did. One could argue that perhaps this story shouldn’t have been told, but it’s harder to argue against being glad that it was. 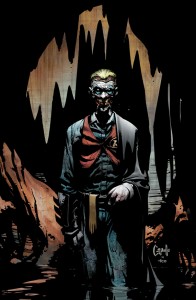 2. Batman (Snyder / Capullo)
The aforementioned title that Scott Snyder is being critically praised for, and another character that’s made it into the new DCU largely unchanged. Change is good, sure, but not always necessary. Snyder proves that it doesn’t take some kind of continuity-altering event to give a comic a shot in the arm; all it takes is talent. A strong start after the relaunch led to the far-better-than-feared Court of Owls / Night of the Owls quasi-event, and not long after that came the current Death of the Family arc featuring The Joker. A Joker that’s far creepier than any appearance in recent memory for this often ill-used character. These storylines, which have spanned across most of the Bat-titles, have been anchored in the main title by Snyder. And it’s great to see artist Greg Capullo with a prominent gig again. This is one of the few New 52 titles that has not only maintained its strength, but gotten even better.

So what are some of the other ones you ask?

I can’t hear you.

Great! I will tell you! 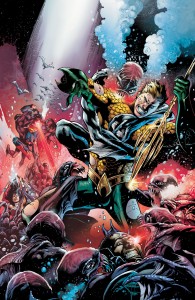 1. Aquaman (Johns / Reis)
1. Justice League (Johns / Lee / Reis)
Two #1’s? Sure, why not; there were fifty more of them when the New 52 started. I’m cheating a bit here under the excuse given to me by the current Throne of Atlantis crossover between these two titles, so I don’t have to choose between two awesome Geoff Johns comics. Johns started strong reintroducing the League, faltered a bit with the book’s second arc, but came back better than ever with the start of ToA. Whereas Aquaman started off strong and has simply just stayed there. When the New 52 began, Justice League was saddled with the impossible task of winning over both new and existing fans. Expectations were just too high for this book to please everyone. Conversely, rarely have their even been great expectations for a new Aquaman title, so this one surprised just about everybody. But now, the comic of high hopes joins up with the comic of none, and they’re both yielding a great arc featuring an Atlantean invasion of the east coast. For all of the trouble the New 52 has gone through since its launch, it’s great to see at least some of the titles remain as enjoyable now as when they began.

Other honorable mentions: Batgirl, featuring a healed but tentative Barbara Gordon, was extremely enjoyable under former writer Gail Simone, but now readers themselves are a bit tentative about this title since Simone’s firing. Geoff Johns’ Green Lantern was a bit stagnant for awhile but the onset of Rise of the Third Army has livened things up, and the introduction of new GL Simon Baz was a lot better than many expected. And it might not be a New 52 title, but Art Baltazar and Franco’s Superman Family Adventures has every bit the fun and charm that their preceding Tiny Titans comic did.

So those are my Top 5. Or 6, I guess. What are your favorite DC titles? Let us know, and stay tuned, as one of these days I’ll share my favorite comics that don’t have a Marvel or DC logo on the cover.