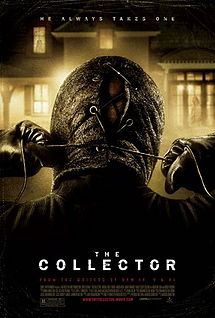 The Collector is a movie about a masked man that sets up intricate death traps in family homes while they are away, and makes sure he’s there when they get back. It’s a pretty basic plot. Much like other movies in the genre like Saw and Hostel, this movie leans heavily on visuals of extreme gore and violence to shock the viewer. Most of the time I feel that a movie that does that is using the visuals as method to mask a crappy or non-existent story. The Collector is one of those movies.

The Collector doesn’t have a story so much as it has an explanation why we’re seeing what we’re seeing. Unfortunately, that is just one of the things I didn’t like about it. It didn’t give me a character I could root for 100%, it didn’t give me a quality story and it didn’t give me the urge to ever watch it again. The main character, Arkin O’Brien, isn’t exactly what one would call a good guy. I don’t have any problems with having a less than savory person being a main character, but give me a reason to like them. I never really felt that Arkin was anything more than expendable, which is a shame. This isn’t a shot at the actor, but more the character he was tasked to portray. Unlike Saw, the story wasn’t there. There’s no plot twist and there’s no explained motivation for the killer. In my opinion if a movie is going to dump a bunch of gore on me there better be a reason. This was all style and no substance.

What The Collector did have was great visuals (for those who don’t turn away at the sight of blood) and pretty creative death traps. The cinematography was excellent and showcased the effects nicely. Unfortunately, I’m not a big fan of the torture porn subgenre and I need more from my movies than this. Having great visuals in an otherwise bad movie is like putting lipstick on a goat. It looks nice, but it’s still a goat. I don’t want it to sound like I hate gore, because I don’t. I love a good gore-fest, but The Collector felt like a one trick pony.

If you’re into excess gore and you don’t need a story backing it up, this movie just might be for you. If you’re more like me I would recommend that you pass and just watch Saw instead. It has all of the creativity and a suspenseful story to back it up.

The Collector (R) is available for purchase or rental, both digitally and on disc.