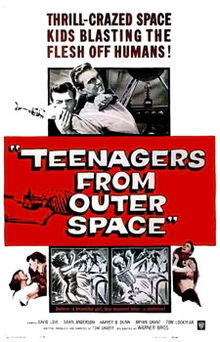 Technically, Teenagers from Outer Space is a really bad movie. There are things about this movie that are laughably bad. Despite all of that this is one of my favorite movies. It has a certain charm to it that I just can’t deny. It will never find itself on any credible “best of” list, but it’s on mine!

Teenagers from Outer Space is a science fiction film from 1959 that was written and directed by Tom Graeff. It’s about a group of human-like aliens that come to Earth in an attempt to use it as a farm to raise gargons for food. Gargons could be a threat to Earth, and one of the aliens strongly opposes raising gargons on a planet with intelligent life. Thus begins a conflict amongst the aliens and the beginning of this classic sci-fi film.

This movie was made for $20,000. Let that sink in. $20,000. Even for 1959 that was a ridiculously small budget. Tom Graeff wanted this movie made so badly that he went to some extreme cost-effective measures to pull certain things off. He convinced a little old lady that he was a student at UCLA to secure her house as a location to shoot (he had in fact graduated 5 years earlier). On top of that the old lady let them use her electricity to power their equipment! The alien spacesuits are basic flight suits decorated with masking tape, surplus Air Force helmets and dress shoes with socks over them. The ray gun is just a classic 1950’s toy, a Hubley’s Atomic Disintegrator. They use a science classroom prop skeleton that looks gloriously cheesy when filmed and the gargon is something to behold. Trust me, you have to see and hear the gargon to really appreciate it. The effects and acting were pretty rough, with the exception of actress Dawn Bender who played Betty Morgan with a “sweet as apple pie” charm. I just really dig this movie. I make no apologies for this. I like the story, I like the bad acting and I love the drive Tom Graeff had to get this movie made.

Unfortunately for Tom one of the producers sued him for their investment back before the movie was released, which they got. When the movie did come out it bombed at the box office and critics didn’t have many kind words for it. This among other things led to Graeff having a breakdown and proclaiming himself to be the second coming of Christ, even going as far as unsuccessfully trying to legally change his name to Jesus Christ II. He got his head sorted and had a brief reappearance in Hollywood in 1964 as an editor for a film called The Wizard of Mars. In 1968 Graeff took out an ad trying to sell a new screenplay he had written. An LA Times columnist outed Graeff as Jesus Christ II, and that eventually killed his career. The crazy story of Tom Graeff and any hope for another great sci-fi movie from him ended when he committed suicide in 1970. No, I’m not making any of this up. This dude had some heavy stuff going on in his life, and Teenagers from Outer Space is the highlight of it.

Teenagers from Outer Space is a fantastically bad and fun movie that will never be remembered by the masses with warm feelings. I’m a huge fan and think everyone should see this movie at least once. Worst case scenario you have a good laugh with your friends while watching it. It’s in the public domain so you can score a copy super cheap. If you happen to own a copy of Destroy All Humans! PS2 video game, it’s an extra feature on the disc!