I WILL TELL YOU #82: Love Is Stronger Than Death

I Will Tell You #82:
Love Is Stronger Than Death

I probably would not have gotten into comics if not for my mother.

The truth is, I wouldn’t have gotten a lot of things, if not for my mother. We can all probably make that claim. It’s not that Mom encouraged me to get into comics, or anything. It’s just that, well, when I was a kid, she was my ride to the comic store every Saturday morning.

Yeah, it sounds kind of trivial, but before anyone coined the term hockey mom or soccer mom, my mother was a comic mom. Not just to the comic store, but also to every bookstore and newsstand in the area, if there was a particular elusive issue to be had, as there often was. And not just on Saturday, but on Sundays, too, whenever there was a local comic book show nearby. Or across town, in some cases. 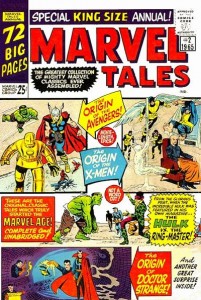 She not only provided the transportation, but also the funding, at least sometimes, when I would spot a long prized and sought-after back issue that exceeded the meager savings my weekly allowance would generate. Maybe it was the gleam of excitement in my eye, or my excessive cajoling, or my flimsy premise that my world would probably come to an end if I couldn’t own that copy of Marvel Tales #2; whatever it was, she usually relented. And moments like that made me realize I had the best mom in the world.

Of course, I knew that already, but such knowledge is often quickly pushed into the background when ordered to go to bed for the tenth time, or being told to eat anything that’s green and limp, or made to do homework on a beautiful day. At that point, we’re sometimes convinced that our mothers only gave birth to us so they could have the sadistic satisfaction of having the power to make our lives miserable.

Before I finally discovered and stuck with comics, I went through a lot of phases as a kid. I remember being enamored with Hot Wheels for a time. And GI Joes. And model kits. Not to mention all of the one-offs that I would spy every time Mom made the mistake of taking me to Toys R Us. And she graciously and generously indulged most of my pleas. She even indulged me later in my music phase, which came and went as quickly as my various toy phases. To this day, an acoustic guitar, a harmonica, a set of bongo drums, other instruments I’ve probably forgotten remain in my crawlspace as evidence of her uncomplaining generosity.

This generosity was possible in no small part due to being part of a dual-career family; while Dad was a manager at a real estate / land development company, Mom’s career as a certified public tax accountant allowed our family to live pretty comfortably. While career moms weren’t unheard of the 70s, they were still a somewhat rare thing, back then. And she had already been at it for awhile; she got her degree in Public Accounting from the University of Detroit back in 1948, a time when women earning such a degree was largely unheard of.

Of course, there’s generosity of the wallet, and then there’s generosity of the heart. In her younger days, Mom gave a lot of her time and skills to a number of charitable efforts, most of them focused on helping women, from those trying to escape domestic abuse to those trying to further their professional status. Mom was seen by many, men and women alike, as an inspiration, for her professional and personal accomplishments showed that achieving a college degree and balancing a career and home life could be done, as difficult as it was for her. 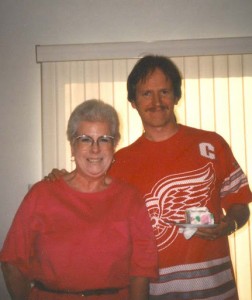 Needless to say, I benefitted from her strength of character for as long as I can remember. As she dropped off a nervous five-year-old me on my first day of school, she promised she would be there to pick me up afterwards, a whole three hours later. And she was. She nursed a lot of skinned knees and scraped elbows. She gave the uncertain sixteen-year-old me career guidance and suggestions, at a time when a know-nothing kid was being asked to make important decisions by every high school teacher and college recruiter that would impact the rest of my life. She helped me get through tough times in college and early in my career. And, she gave the forty-two-year-old me a shoulder to cry on when my marriage was crumbling and divorce became the only solution.

Although she retired from accounting at age 65, she continued to work part time doing taxes for selected clients until, at age 80 in 2006, she retired for good so that she could focus on caring for my aging father, who was plagued with an ever worsening case of dementia and other various physical ills.. Although she wasn’t getting any younger either, her dedication to family remained strong.

Dad passed away two years later, and Mom had barely settled into a life where she could finally and truly enjoy her golden years when, about a year later, she herself was sadly diagnosed with Alzheimer’s-related dementia. The only solace to this distressing development was that her condition was still in an early-to-moderate stage, and despite increasing memory lapses, she was still able to enjoy life and engage in some of her favorite pastimes, such as walking and gardening; pastimes that she had little time for as a career professional and caretaker.

She largely enjoyed these pastimes until late last summer, when, as written earlier here, she took a fall that resulted in head trauma that seemed minor at the time but actually kicked off a dramatically accelerated decline in her mental state. This in turn created a number of physical ailments that she was mostly able to overcome individually, but collectively left her in a gradually weaker physical state and grossly diminished mental one. As additional medical problems developed, doctors eventually determined that these could not be treated in her now-frail state, and advised that she be moved to hospice care last month.

Which is where she comfortably resided for about ten days. That is, until Saturday, March 2, when she went to sleep that evening, and some time the following morning, took her final breath. She did not awaken, save perhaps in the arms of my father, who had been waiting patiently for her to join him these past five years. Along with her parents, and uncounted other family members who had made their final journeys prior to her own. 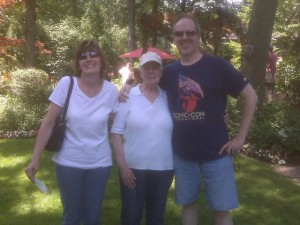 Mom was the final member of my family’s senior generation to make that journey. She is now with her husband, his brothers and sisters, and her own mom and dad. She truly is in a better place than she was over the last six months of her life.

Meanwhile, my sisters and cousins and I all look at each other, uncertain and unready to take the family mantle. But then, I’m sure this is not unlike how my parents and aunts and uncles felt, when their own parents passed on.

But then, they’re only gone in that literal sense. Mom had given so much of herself to me and to so many others that to say she’s gone is more than a disservice; more than disrespectful; more than dismissive of all that she’s done; it’s just wrong, in every sense.

Mom’s left so much of herself behind, in fact, that it’s all too easy to forget that she’s no longer with us. I honestly believe I would not have succeeded in either my career or my education without her encouragement, strength, and guidance. My adult life would not be where it is today without her. And I probably would have endured a lot more infected cuts and scrapes as a kid if not for her immediate attention to such things.

And yeah; I probably never would have gotten into comics.

So as I mourn her passing, I do so with the knowledge and understanding that, in the long run, her life will have had a far longer lasting impact on my own life, than her death currently does. For those of us who remain, the loss of someone so cherished in our lives forces us to make a transition. We grieve, we adjust, but one way or another, we find a way to move past it.

We find a way to move on.

And we do move on.

But that person’s life? That stays with us, well, for a lifetime.

A person’s love; their advice, their guidance, their lessons; the joyous memories, the good times, the special moments; those and all else that they impart upon us become a part of us, even after that person passes on.

Those never die. Love is stronger than death.

So rest in peace, Mom. You live on in all of the people you have touched over your 86 years.

I will remember you always. I will love you always. And I will tell you that every night.

Category: Comic BooksBy Jim JohnsonMarch 26, 2013
Tags: I Will Tell You