Despite her age, declining mental state, and increasing reliance on others, she remained physically healthy and as active as the aforementioned conditions would allow. Summer mornings, always her favorite time, frequently provided the ideal setting for enjoying a cup of coffee on the back patio, or tending to her garden, or taking a short walk around the block in her suburban neighborhood. On one particularly beautiful and serene late August morning, she chose to do the latter, and with the assistance of the in-home health care professional attending to her that day, embarked on a leisurely stroll that bore little dissimilarity to any of the previous walks she had embarked on that summer. 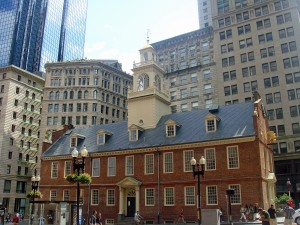 Before the serious nature of her fall was apparent, I snuck away for an already-planned Labor Day weekend trip to visit downtown Boston with my g/f Susan.

The fall and subsequent cut to her face that she suffered halfway through, however, made it quite apparent that this particular walk around the block was decidedly unlike any that she had taken before. The cut on the underside of her chin was serious enough to require immediate medical attention, so what had been shaping up to be a beautifully tranquil morning instead turned into a significantly more stressful one, as unexpected trips to the hospital are usually wont to do.

In the kind of irony that’s so exquisite that it could only unfold in real life, the severity of the facial gash just might have been what saved her life. For in many hospitals, standard procedural care for seniors now dictates that any kind of head trauma requires a further examination of the head, particularly the brain, to ensure that there is no further and more severe cranial injury, such as internal bleeding. So the physician who treated her in urgent care ordered a head MRI for her, so that all could be assured that there was no bleeding inside her brain. 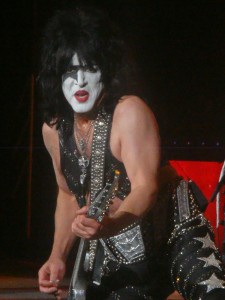 Shortly after Labor Day, her condition was stable enough, so I was also able to go see KISS and Motley Crue at Pine Knob / DTE Energy Music Theater.

Except that, when the MRI results came back, the scan did show bleeding inside her brain. A serious enough condition on its own, needless to say, but one that poses a special risk to Alzheimer’s-stricken seniors, such as herself, and one that especially poses a risk to seniors on blood thinning medicine, such as she was. Had she not required stitches to her face, there would have been no trip to the hospital, no MRI, and no knowledge of internal bleeding. She would have continued to receive her blood-thinning medicine, which very likely could have turned out to be fatal had it caused the bleeding to worsen.

Instead, the medication was discontinued, and she was admitted to the hospital for observation. A subsequent scan, fortunately, showed no further bleeding. Her mental state was seemingly unchanged, the cut on her chin was healing, and her short term health seemed to be in good shape.

And it was. Long term, however, was a different story. 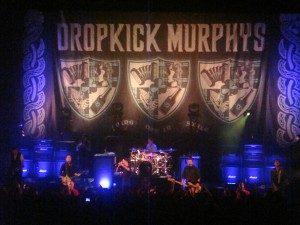 I was stressing pretty bad a couple of weeks later, but the situation was out of my hands so I went downtown to see Dropkick Murphys. And part of the Tigers game beforehand, across the street at Comerica Park.

As summer gave way to autumn, her physical wounds all healed, but problems with her mental state developed, and did so quickly. For anyone suffering from a degenerative brain disease, as Mom is, the worst thing that can possibly happen to that person is to suffer any kind of brain injury. As all of us close to her have learned these past few months, both from her doctors and from her precipitous decline, such an injury can often accelerate degenerative diseases such as Alzheimer’s, as well as bring about other forms of dementia in people her age and condition. And sadly, in her case, both have occurred.

As have a new round of physical ailments. Come October, blood clots, once kept at bay by the blood-thinning medicine that she was no longer being given, developed in her legs. One of these clots broke free and moved into her lung. She faced a grim prognosis regarding this clot reaching her heart, but it was one that blessedly did not come to pass. Even so, she faced, and still does, a pair of medical conditions that are at odds with each other in terms of their treatment: without a blood-thinning regimen, the blood clots could recur and place her at an elevated risk for a pulmonary embolism. With it, she’s at a greatly elevated risk for a stroke or another brain bleed should she ever fall again. 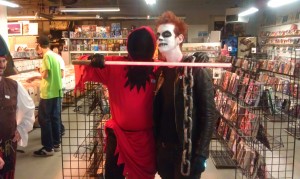 Even B2TP’s Halloween Bash provided a welcome distraction. I’m the one who’s not Sean Pigeon.

In a damned-if-you-do-damned-if-you-don’t scenario where the consequence is Mom’s life, the doctors have been instructed to again administer the blood thinners, as the embolism is believed to be the greater of the two risks. And in the days since, Mom’s physical health has rebounded, despite coming down with a fairly mild case of shingles, yet another common malady for seniors, amidst her recovery. But in another one of those instances of irony, her clouded mental state made her largely unaware of all of the physical hurdles that she had to overcome, which was another oh-so-brilliantly disguised blessing.

But, overcome she did, first in the hospital and now in the nursing home where she now resides,  close to her real home, receiving the round-the-clock care she now requires while she is visited daily by family. A family who arises each day with a guarded optimism about Mom’s state. In the past few months, Mom has been through more challenges than anyone, regardless of age or mental state, should have to endure. And during this time, it felt as though someone had bought her a ticket in some kind of karmic lottery, and that she had lost. 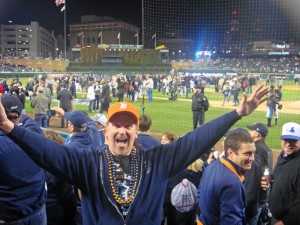 Watching the Tigers sweep the Yankees to go to te World Series was the best distraction of all.

There will be no more walks for mom. Her mind is quickly moving further and further to a place where no one can reach. But her mind, my sister and I like to think, will now forever be a quiet, serene summer morning, where she will be enjoying a cup of coffee or tending to her garden.

And we believe that, not because we require a naïve sense of comfort, but because there’s still enough of the Mom we knew to tell us as much. While her words now make little sense to anyone but her, it’s clear that, wherever her mind is, it’s in a place where she is happy and content. In this place, Dad is still alive and she speaks of good times with him. I don’t think she always recognizes me as her son, but she nonetheless recognizes me as someone who makes her happy.  And other deceased family members, friends, and even pets populate this place where she now dwells.

I almost wish I could go to this place myself. 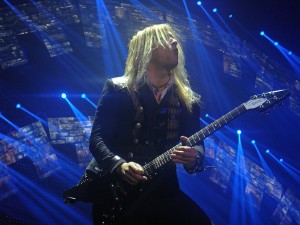 Come mid-November, Mom was doing much better, so I felt absolutely no guilt venturing down to Toledo to see the Trans-Siberian Orchestra for the umpteenth time.

The mere idea that Mom would ever be happy again was a seemingly distant and irrelevant thought just two months ago, when we honestly believed that there was a chance she wasn’t going to pull through. I wasn’t sure that I’d ever see that huge smile on her face when I went to visit her. Or listen to her talk about Grandpa helping her with her homework. Or give her a Christmas card. Hold her hand. Kiss her good-bye for now and tell her I’d see her next time.

If there is a karmic lottery, she didn’t lose it. She won. Big time. We all did. Because she’s still alive. And she’s still Mom. And my life, despite her diminished condition, is all the better for it. 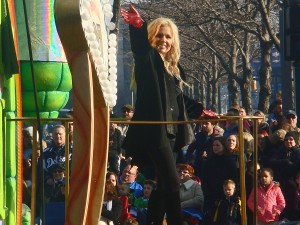 Karen Newman, not seen so much with no Red Wings games during the NHL lockout, says hey from the Wizard of Oz float during America’s Thanksgiving Day Parade on Woodward Ave.

So this holiday season, if you have a loved one who’s at the peak of their health, cherish every damn minute of it. And if they’re not, cherish that you still have them. And if you don’t, cherish what you had.

Could things be better with those close to you? Maybe. But trust me, they could also be worse. Far worse.

So in case you’ve wondered, kids, that’s where JJ’s been these past few months. And if you’re still here, thank you for enduring this whole episode. It’s far from pop-culture related, but sometimes it’s necessary to air out some of the old business before dealing with the new. And as I’ve said elsewhere, it’s my column and I’ll cry if I want to.

The pics sprinkled throughout these ramblings are from other goings-on these past several months, just to show that life hasn’t totally sucked in that time. And to give me an alibi to show why I haven’t been writing anything.

I will tell you. I promise.