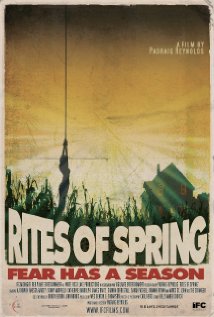 I recently partook in a little film titled Rites of Spring. The sweet retro poster art caught my eye and something about it made me really want to see this movie. Maybe it was the fact that it shares a name with a sweet band. Who knows? Being a slave to my love of horror movies, it didn’t take long for me to make time for it. Rites of Spring is best described by a tale of scientific study. Rites of Spring is like when you wake up in the morning really hungry and in the mood for cereal. You grab a box of Coco Puffs but you only get about 1/2 of a bowl out of it. You’re really hungry, so you look at the top of your fridge. You’re staring a box of Trix in the eye. It’s decision time. Do you just stick with the Coco Puffs, which you know you’ll enjoy, or do you add the Trix and go for a full stomach? Rites of Spring added the Trix, and it probably wasn’t a good idea.

Rites of Spring came out in 2011 and was written and directed by Padraig Reynolds. It started out as your standard thriller with a pretty sweet plot (Coco Puffs). I was really into the story and was really looking forward to see how this was going to unfold. Unfortunately, Reynolds decided to add a supernatural element to the film that threw it off because it just didn’t seem to fit with the rest of the movie (Trix). It just didn’t seem to fit. After that the movie just kind of bounces back forth between being a standard thriller and a supernatural horror film. It never really found its footing and that was a real shame. I did enjoy the movie…I think. Well, I enjoyed the 2 parts of the movie, just not together. If these two ideas were turned into their own movies, or done as an anthology it would have been much better. Hell, even if it just would have been done in two clear cut acts instead of meshed together it would have been better.

The acting was something that had me dazed and confused. The two main characters were Rachel (Anessa Ramsey) and Ben (AJ Bowen). In a nutshell, Rachel is a character that was at the wrong place at the wrong time and Ben was a good guy that made a bad decision because of his poor luck. I dug the job Anessa did. I liked the character of Rachel. I was rooting for her the entire time. Ben starts off by leaving a terrible taste in your mouth, and relentlessly tried to redeem himself. In my opinion, AJ overacted the hell out of this role to the point where I wanted him to bite it just because Ben was no longer a believable character. It was pretty frustrating.

All in all I have no idea what to make of this. The ideas were good, but not executed as well as I thought they could have been. The acting was good, save for one of the main characters. The effects and imagery were good, except the supernatural element just didn’t seem to fit. Do you see what I’m getting at here? For every good thing I have to say about this movie there’s a negative that comes with it. I just don’t know what to make of it. Did I think Rites of Spring was good? Maybe? Hell if I know.