Greetings and salutations, my friends.  For this weeks Fabulous Find,  I’ll be talking about the 1967 Marx Marvel Super Heroes.  I recently purchased a set at a Back To The Past Collectibles auction.  Well, I won five of the six figures, but I quickly added the sixth, and final, figure via eBay, a few days later!  So what exactly are the Marx Marvel Super Heroes?  Well, if this is any kind of column at all, I better get right to it and spill the beans!

The Marx Marvel Super Hero figures are plastic figures of Captain America, Daredevil, The Hulk, Iron Man, Spider-Man and Thor.  In their day, they were maybe, the most popular Marvel toys made and sold.  Though back in 1967, there were not all that many Marvel toys!  But generally these were easy to find and cheap to buy.  I found a picture of the box they sold from in The Full Color Guide To Marvel Silver Age Collectibles, From M.M.M.S. to Marvelmania by J. Ballman, but because of copyright law, I wasn’t able to show you here.  But based on that picture it appeared the figures sold for thirty-nine (39) cents each in stores.  By the way, I highly recommend Ballman’s book to any and all collectors of early Marvel toys and collectibles!

Of course you could also order the figures through the ad that was run in Marvel Comics!  Through this ad, it looks like you could order the figures in two sets of three figures each for $ 1.50 plus 50 cents postage.  Set A contained; The Hulk, Iron Man & Spider-Man, while Set B contained; Captain America, Daredevil & Thor.  Marvel advertised them as; “molded and unbreakable 3-D statues … Paint ’em or just set ’em around …”.  Here’s that ad: 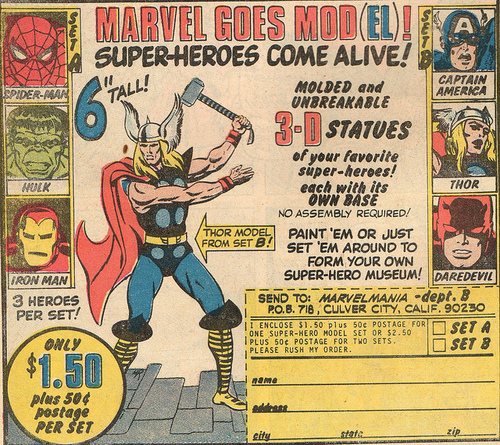 Even though Marvel’s ad said they were unbreakable, time has shown otherwise, as certain of the figures tend to suffer damage over the years.  Specifically, the Daredevil, Spider-Man and Thor figures.  Daredevil tends to experience broken fingers in his upraised hand and his billy club is also very susceptible to being broken off.  Spider-Man fingers are also very liable to be broken off of both of his upraised hands.  And lastly, Thor will be often found with broken fingers, the strap of his hammer missing and/or one or both of the wings missing from his helmet!

My figures are painted and though they don’t have the best paint job and some of the paint has started to wear off, there is no damage to any of the figures, that I’ve noted above often happened.

Each of the plastic figures are cast in various hues or colors.  Ballman has identified eight colors in all.  With the first figures out of the molds being blue, green, orange and bright red.  Later casts were made in brown, dark red, silver and finally light grey.  My Iron Man & Spider-Man figures are blue, The Hulk & Thor figures are green, my Captain America figure is bright red and finally the Daredevil figure is silver.

As I’ve stated, my figures are painted and personally, I think the figures look better this way, but some purists may prefer the figures in their “natural” state.  Though the one and only complaint I really have is that the original owner of my figures didn’t bother to paint Thor’s face and arms with flesh colored paint.  He looks a little like a Skrull with his green face and arms.  This works on my Hulk figure, but not so much on the Thor figure.

Actually on the painted figures you can really see what a great job of sculpting that was done on these figure molds.  Those details are missed on the figures left in their original state, at least in my opinion.

These figures were made in the thousands, and maybe hundred of thousands, so they are still relatively easy to find, both in their original colors, as well as, painted.  Check eBay, if you’d like to see what they currently are selling for, and I’m sure you can pick up the complete collection without “breaking the bank”!  Needless to say, professionally painted figures will sell for more than poorly painted ones.  As far as I know, these were never sold pre-painted.

I’ll leave you with a picture of the six figures that have been professionally painted, so you can get an view of what really nicely painted figures can look like! 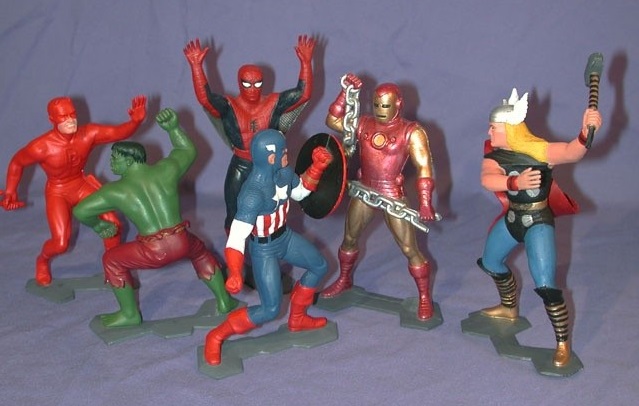