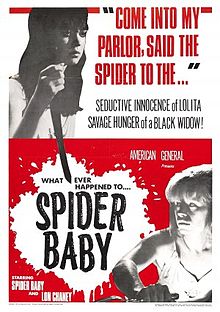 This installment continues the Motor City Nightmares theme with a cult classic from 1968, Spider Baby, starring Sid Haig. Haig is best known to modern day horror fans as Captain Spaulding from the Rob Zombie films House of 1000 Corpses and The Devil’s Rejects.

Spider Baby is about a caretaker named Bruno and the three orphans he looks after. Bruno is played by the legendary Lon Chaney, Jr. If that name sounds familiar it’s because he was the Wolf Man in the Universal classic. The three orphans are Elizabeth, Virginia and Ralph (Sid Haig) Merrye. The three orphans suffer from a rare disease called “Merrye Syndrome” which causes them to mentally regress until they reach their most primal point.

The casting was great for this film. Haig and his fellow orphans did a great job of being creepy and carrying a childlike charm, while Chaney gave me that sense of safe familiarity. There were a couple of times when he entered a scene that I let out a sigh of relief.

Spider Baby came out during a time that was very hit or miss for me in the world of horror. A lot of films from this time period were heavily influenced by one another and that wasn’t necessarily always a good thing. This one definitely stands on its own two legs and I haven’t seen anything else like it. I will say that I am a little disappointed in myself that it took me this long to see it. It’s something that fell off my radar and unfortunately seems to have done the same with a lot of today’s horror fans.

Spider Baby was pretty good, but it wasn’t perfect. The pacing seemed a bit off throughout the movie and there were some scenes that probably could have been cut and would have made the film better in doing so. The end of the movie seemed a bit hokey and forced as well, but I wouldn’t say it ruined the movie.

Spider Baby was a solid movie that probably doesn’t get the recognition it rightly deserves and that’s a shame. This movie definitely isn’t for everybody, but it’s definitely worth a watch if you dig black and white horror flicks that rely on solid story telling rather than over-the-top thrills.