Welcome back for another RETRO REVIEW, and this week I’m going back to an issue in the early Silver Age, with D C Comic‘s Superman’s Pal Jimmy Olsen # 72.  This comic is cover dated October 1963 and sports a very nice Curt Swan and George Klein cover!  The cover features a few of the many transformations that Jimmy had gone through over the early years of his comic, including the giant turtle man, the human porcupine, the wolf-man and of course, Elastic Lad! 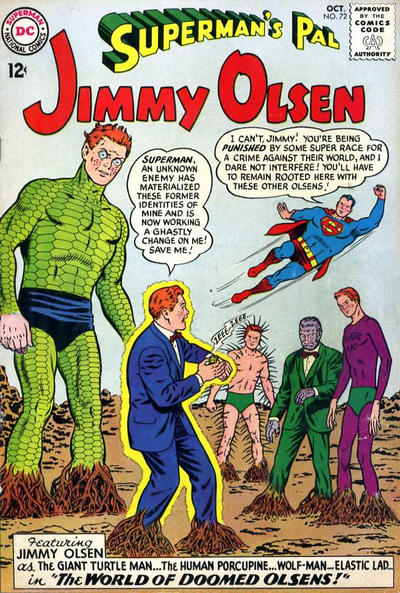 The cover supports the first story in the issue; “The World Of Doomed Olsens!”  This story is written by, none other than Superman’s creator, Jerry Siegel and was drawn by the cover artists; Curt Swan, providing pencils and George Klein, supplying inks!  It’s only nine pages long, but it’s a classic!  The story starts with Jimmy appearing on a television show called “Meet the Celebrities”, where he demonstrates some of the fabulous changes he’s gone through.  First he demonstrates his Elastic Lad serum, then he demonstrates the serum that transforms into a wolf-man!  Then he switches to video and shows his transformations into the human porcupine and the time he was transformed into a giant turtle man!

As he starts to tell of the time he was transformed into a fat version of himself, an alien calling himself, the Collector, swoops in, flying a  see through sphere and kidnaps Jimmy, taking him to a strange planet, the planet Gion-El, a split instant later!  Hmmmn, you might want to take a closer look at the spelling of that planet readers!  Does it remind you of something?

The Collector materializes duplicates of each of the transformed Olsens and Jimmy earlier demonstrated or spoke about.  Each of the duplicates threaten Jimmy in turn but he finally convinces them that they should be helping him and not the Collector!  The Collector roots each of the Jimmys to the ground and Jimmy is forced to summon Superman with his signal watch.

In fact, the Collector is actully, Mon-El of the Legion of Super-Heroes and Jimmy deduced that it was he, due to the fact that the microphone was partially made of lead.  Right!  That’s all it took!  He then quickly deduces that the giant turtle man was Colossal Boy in disguise, Elastic Boy was really Chameleon Boy, wolf man was Chameleon Boy’s pet, Proty II, the human porcupine was Cosmic Boy, and finally fat Olsen was actually Bouncing Boy!  Now does the Planet Gion-El make sense?

Now that Jimmy Olsen has solved the mystery of the Collector and the duplicate Olsens Superman returns and carries Jimmy through time to the future, where the Legion of Super-Heroes make Jimmy an honorary member, having passed his “super-initiation test”!  ANd as Superman says; he’s thrilled for Jimmy, as he’s a fine boy and deserves this honor, the story ends!

The issue also has two additional Jimmy Olsen stories.  The second one is; “The Super-Test of Jimmy Olsen!”  Hmmmn, sounds a little like the previous “super-initiation test”, doesn’t it?  In this story, Superman helps Jimmy Olsen gain status with some kids who think he’s a phony!  All this in eight pages!  The writer of this tale is unknown, but the art, both pencils and inks was provided by John Forte.

And in the last story, entitled; “The Secret Of Monster Island!”, Jimmy and Perry White are forced to crash land a helicopter on a strange island, where they are attacked by monsters!  Eventually Jimmy comes up with a plan that enables Perry and he to use one of the monsters to power their helicopter’s radio and get word out and are rescued.  After they have been saved and Superman returns from a space mission, Jimmy has Superman fly him back to Monster Island, where he digs out the remains from what could be a large ark.  Jimmy thinks just maybe, when the Biblical flood took place and Noah loaded up all types of animals, that when the waters began to recede Noah choose to place these dangerous “monstrous” animals on this island so that they could not prey on mankind!  All that, including a bible lesson in only eight pages!  Boy could they tell a story back in the day.  Again the writer of this story is unknown, but the art was again provided by Curt Swan and George Klein.

Say what you want about the art and story telling during the Silver Age of Comics, but you sure got your monies worth, twenty-five pages for only twelve cents!  Frankly I love these old comics and hold them against today’s comics any day!

So thanks for reading each week!  This is my 200th post, if anyone’s counting.  Greg Turner, signing off.