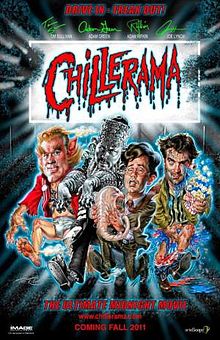 As we creep closer to our local horror convention, Motor City Nightmares, I bring you yet another film starring one of their guests. This week I’m going to talk about a movie starring the legendary Kane Hodder. Kane is known best for playing the machete wielding maniac Jason Voorhees in the Friday the 13th series more times than any other man, appearing in Parts VII-X. Our focus isn’t on a Friday the 13th movie, or even the Hatchet movies in which he plays the grisly Victor Crowley, but on a little gem called Chillerama.

Chillerama is a horror/comedy anthology from 2011 that has a bunch of familiar faces in it. Kane Hodder, Lin Shaye, Ron Jeremy, Joel David Moore, Eric Roberts and Richard Riehle are all faces you’ll recognize throughout the film. Chillerama is made up of 3 short films and a fourth film that is used as the main wraparound story. I saw it sitting on a shelf at Best Buy and after a brief once over decided it was coming home with me.

Can I sell my movie posters online?

The first uninterrupted segment is Wadzilla, starring writer/director Adam Rifkin, the lovely Sarah Mutch and has brief appearances from Lin Shaye and Eric Roberts. It’s about a man who begins to have problems with his…parts…after taking some medication given to him by his doctor. After a series of unfortunate events, a small piece of him ends up growing to Godzilla like proportions and terrorizing the city…hence the name Wadzilla. This segment is tasteless and funny, with an abundance of adult humor. It harkens back to the days of giant monster movies which, in an odd way, gives it a little bit of charm.

The second segment is I Was a Teenage Werebear. I had no idea what I was getting into with this one. When I finally got the premise I was in tears with laughter. I Was a Teenage Werebear has the music loaded beach party theme reminiscent of the Frankie Avalon and Annette Funicello films from the 1960’s, but with a comedic horror element to it. I couldn’t wait to see how far writer/director Tim Sullivan would take it and he took it to just the right spots.

The final uninterrupted story stars Joel David Moore, Kristina Klebe and Kane Hodder. This one, my friends, takes the cake with its hysterically awesome absurdity. The Diary of Anne Frankenstein is a tale about Adolph Hitler trying to win the war by building the ultimate killing machine. Joel David Moore plays Hitler in such an absurd way that you can’t help but laugh every time he opens his mouth. Kane Hodder takes a break from his normal menacing style and adds to the already hysterically awesome segment. Writer/director Adam Green hit this one out of the park in what I feel is the best segment of the movie, and that’s saying a lot because they were all awesome.

The segment that bookends the other segments and the film as a whole, Zom-B-Movie, gives us the grand finale. Zom-B-Movie stars Richard Riehle, Corey Jones and Kaili Thorne. The segment is about a drive-in theatre that is showing three movies on its final night in business. During the showings of Wadzilla, I Was a Teenage Werebear and The Diary of Anne Frankenstein, a zombie outbreak is slowly taking place among the patrons of the drive-in. We get some decent plot and character development in small doses throughout the film, and that leads to an awesome climax. Joe Lynch did a great job writing and directing a segment that was going to end up being seen in pieces throughout the movie.

Chillerama is a ridiculously well done, offensive to some but funny to all (that have a slightly twisted sense of humor) film that unfortunately flies under the radar of most people. If you have the chance I suggest you check this one out.