Welcome back to another Fabulous Find, number sixteen (#16) in a series, collect them all.  Thanks for being a loyal reader and I hope you enjoy this week’s FF!  I’m going back to the fall of 1976!  That was a Presidential election year and featured a face off between, then current President, Gerald Ford, a Republican and Jimmy Carter, a Democratic Party challenger.  But why am I talking about a Presidential election from thirty-seven years ago?  Because there was also a Dark Horse candidate, or should I say a Dark Duck candidate!

In 1976, from Marvel Comic Books, came the Presidential campaign of Howard the Duck!  Yes, that’s right, Howard the Duck!  The comic book character created by Steve Gerber.  You don’t believe me, well I’ve got the campaign button to prove it.  Take a look:

And it’s that very button that inspired this Fabulous Find column this week.  It’s actually one of my favorite collectibles I own for some reason!  But’s that not the only proof of Howard’s campaign, there was the actual comic book, from his comic book series, where he ran for President.  It was Howard The Duck # 8 , cover dated January 1977, and therefore, on the newsstands and comic racks during September and October 1976, prior to the actual Presidential election!  And here’s that cover for your peepers!: 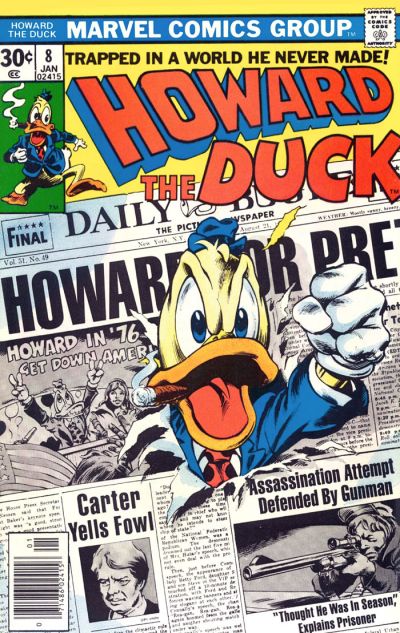 This issue’s cover was provided by the interior art team of penciller, Gene Colan and inker, Steve Leialoha and it was written by the earlier mentioned, Steve Gerber.  And not only was the campaign covered in this issue of Howard The Duck, but also in the Marvel house fanzine, FOOM # 15.  Where Howard’s campaign was also cover featured in a very nice wrap-around cover by Misters Colan and Leialoha!  Take a gander at it: 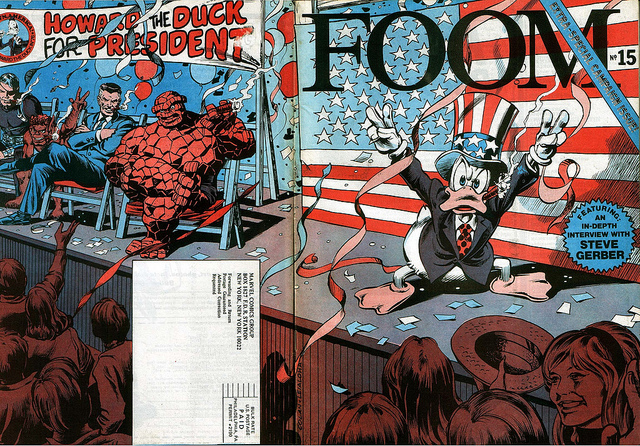 So that must be all there was to the campaign, right?.  But you’d be wrong!  There was also a rare poster/print featuring our fine feathered fowl, by artist; Bernie Wrightson!  Wow!  I suspect that even if you remember seeing the earlier button, comic and fanzine, you just might not have seen this nifty piece of art.  So feast your eyes: 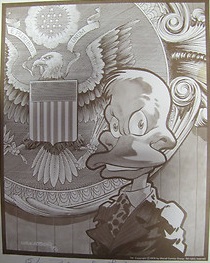 Howard the Duck by Wrightson

Pretty darn cool, at least I think so!  Sorry I couldn’t scan a better or larger picture.  So what happened back in the 1976 Presidential election?  Was Howard elected?  Sadly, no he wasn’t!  Jimmy Carter won the election with 50.1% of the vote, defeating the incumbent, Gerald Ford, who had 48.0% of the vote!  So that left 1.9% of the voters voting for Howard the Duck!  Well, I’d like to think so anyway!

So Howard The Duck wasn’t able to take Beverly Switzler to the White House, in Washington D.C., and they had to settle for settling down in Cleveland, Ohio, where their further adventures have been chronicled in other Marvel Comics!

Ahh, what could have been!  Take care everyone and we’ll see you next week.  This is Greg Turner, signing off.