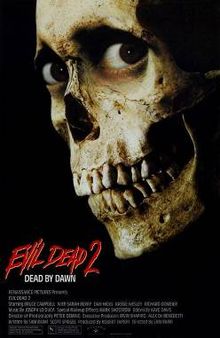 Evil Dead II (1987) is a horror movie written and directed by Sam Raimi and starring Bruce Campbell. It is a sequel to The Evil Dead (1981) and precedes Army of Darkness (1992). The running time is approximately 84 minutes.

Hello, friends! It’s been a few weeks since we’ve had an installment of Spook Show Cinema. The reason for that is I’ve been working on a format change. I was toying with moving from doing an article to doing a short video, but I didn’t feel I could pull off what I wanted. Instead, we’re going to keep the articles coming…but we’re no longer spoiler free. Most of the movies I review have been out for years, and some are even decades old. I’m going to start getting into specifics when talking about these movies. That being said, however, I will not spoil movies that are new releases. I’m a jerk, but not that big of a jerk. With all that said, let’s get to our 26th installment of Spook Show Cinema!

I love the Evil Dead trilogy. All three movies are extremely entertaining and always deliver the viewer a good time. Evil Dead II is a cut above the rest, though. It’s the perfect blend of horror, gore and humor. Bruce Campbell plays the character of Ashley J. “Ash” Williams. Ash is a man who just wanted to spend a quiet weekend in a secluded cabin in the woods with his special lady. Unfortunately for Ash, his special lady gets possessed by an ancient demon and has to fight her and other nasty evil spirits in order to survive. What about that doesn’t sound awesome? The movie doesn’t waste any time getting to the action. Within minutes of the movie starting Ash has already killed and buried his girlfriend and is fighting off the possessed cabin.

With the brief remake/recap of the first movie all wrapped up Evil Dead II really kicks into gear. The movie proceeds to throw copious amounts of humor, gore and action at us with little to no slow spots. We get famous horror movie scenes such as the blood splattered removal of Ash’s hand followed by the reformatting of a chainsaw to replace said hand. That’s right, kids. Ash gets a chainsaw hand. It doesn’t get much more bad ass than that, now does it? On top of all the gore, humor and general awesomeness that Evil Dead II brings us, we also get to see the birth of the Ash that we all love in Army of Darkness. The quips and one-liners have their glorious beginnings in Evil Dead II and it’s a wonderful thing to see.

The cool thing about Evil Dead II is that the ending drops us right into the beginning of Army of Darkness. Ash defeats the embodiment of evil, but doesn’t quite get the win he was looking for. The portal that was opened to remove the evil doesn’t get shut, and takes Ash through time and drops him off in a medieval land. I’m not sure Raimi and company knew there would be a third movie in the series when they gave us this ending, but damn am I glad they did.

Evil Dead II may not be the greatest movie ever made, but it’s sure up there with the most entertaining. It’s scary enough to please horror fans, it’s funny enough to keep people laughing and it’s over the top nature keeps you wondering just what insane thing will happen next. This is one of my all-time favorite movies. If you haven’t seen it you need to remedy that right away.