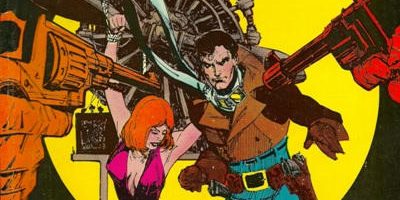 I’m just back from vacation, but have no time to write up a Fabulous Find, or even do a quick new review, so I’m again reprinting one of my first columns from 2010.  I suspect many, if not most, of you have not had the chance to read it, so for your reading pleasure …

The short lived Atlas – Seaboard line of comics didn’t last very long, when they debuted in the mid 70s, but they did manage to publish at least one truly excellent comic, and that would be; The Scorpion # 1, cover dated February 1975.  It was conceived, written and illustrated by Howard Chaykin and would have appeared on the stands sometime during November or December 1974.

The company was created by Martin Goodwin to challenge Marvel Comics, after he left the company and his son, Chip Goodman, who was left in charge at Marvel Comics, and was driven out of the company shortly after his dad left!  In a bid for “revenge”, the Goodwin’s tried to lure away all of Marvel’s writers and artists, by offering them large increases in page rates, with the hope of stripping all of Marvel’s talent away from them.

But all they succeeded in doing was going bankrupt themselves, and only managed to put out a line of comic books that only had one thing in common, the fact that they weren’t very good.  But as I said earlier, there were a couple of exceptions, one of which was the first issue of The Scorpion.  Unfortunately, Howard Chaykin never did a second Scorpion book, only this first issue!

Though he did bring the same character back to Marvel Comics. slightly later, in a slightly different vein, and with a different name, Dominic Fortune.  But that’s another story for another day! 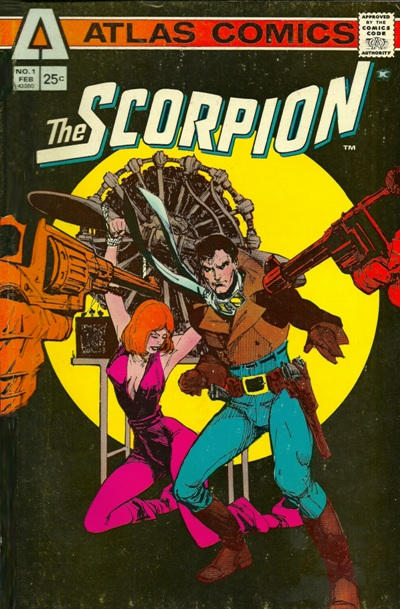 The story in The Scorpion # 1, was entitled; “The Death’s Gemini Commission” and don’t ask me what that had to do with the story, as I have no clue!  It opens with an explanation that The Scorpion’s, alter ego, Moro Frost, who is an extremely long-lived man, who had been known in the past as J. C. Clellan Lowe, a Balloonist-Observer for the Union Army during the Civil War, as Virgil Torrent, Special Envoy for President Theodore Roosevelt, as Ben Turck, a flyer during World War I, and also as Michael Christy Lafayette in 1917 & 18.  This man of many names had disappeared for a number of years after that, only to now appear in the 1930’s as Moro Frost.

In the company of his secretary, Ruby Bishop, who seemed to be much more than just his secretary, they witnessed a plane crash in New York City.  He is approached by the owner of the plane, Roger Boyle, and asked to look into a series of suspicious plane crashes that have plagued his company.  The Scorpion agrees to investigate and while he goes up into the skies to see what he can see, Ruby goes undercover to the dockside bars to see what she can overhear or uncover.

The Scorpion encounters another plane, that has caused the recent crashes and succeeds in downing it.  Meanwhile Ruby overhears something she shouldn’t have and is accosted in an alley.  She holds her own against two assailants, but when the third joins in, she is overcome, but The Scorpion appears and effects her rescue!

They compare notes and discover the man who has hired the men to bring down Boyle’s planes.  But the men The Scorpion has shot down out of the skies have survived and kills the man who hired them and sets a trap for The Scorpion, to get revenge upon him for destroying their plane and weapon.  They lure Ruby out, by forcing Boyle to call and ask for her assistance, and they set an elaborate trap at an airfield with Miss Bishop tied to a plane engine, set on a timer, to start up momentarily.  Hey it’s the comics, why kill a pretty girl when you can just strap her to an engine!

The Scorpion races to the airfield and defeats the pair of bad guys, but has to let them escape so that he can save Ruby from the engine trap.  Needless to say, he saves Ruby and then rushes after the escaping men.  With the help of an airborne motorcycle, you’ll have to buy the comic to enjoy the action, he shoots down the last escaping man, who is attempting to take off in an airplane.

With the case wrapped up, and the girl saved, we see the title’s hero leaving us with these parting words: “It’s mornings like these … when I really start feeling my age.”

There were two more issues of The Scorpion, but these were not written or drawn by Howard Chaykin and frankly were no where near as good as this first issue.  So in my book this is the only issue worth seeking out and owning.  And as I said earlier, this was basically the same character Howie brought to Marvel Comics and published under the name Dominic Fortune.  Which actually was a much better name for hero, at least in my opinion!