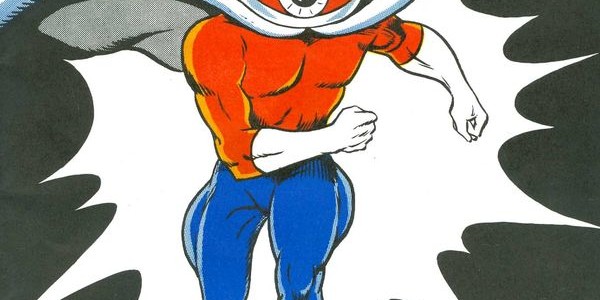 Welcome back to another in my series of Greg Turner’s Fabulous Finds!  Number twenty-one ( # 21) to be exact.  And this week I’ve rummaged around in my fanzine section of my collection and pulled out The Eye Special # 1, dated Spring 1965.  This fanzine is the work of “super-fan” Biljo White, who was located in the city of Columbia, in the great State of Missouri, and operated out of a shed behind his house which he named; “The White House of Comics”!

Bill J. White was one of early comics fandom’s most active fan writers and artists.  He went by Biljo, or Captain Biljo for fun.  He was a huge influence on early fandom and created a number of beloved fan created characters, like the Eye.  He became the Art Director of the fanzine Alter Ego and also published the fanzine; Comiccollector.  He drew many strips, but his most famous was the Eye, a strange crimefighter with an eyeball for a head!  By day, Biljo was a real life hero, as he was a fireman for the city of Columbia, MO.  He passed away in 2003.

But back to the Eye.  Actually, Biljo was not the creator of the character, but he was the first to write and draw a story featuring him!  Say what?  Yep, you heard me, The Eye was actually created by another well known fan, Richard “Grass” Green, but it was yet another “super-fan”; a certain Ronn Foss, who went to highschool with Grass, who drew his version of the Eye and sent it to Biljo sometime in 1963.

Ronn was suppose to be passing through Missouri on his way back to Ohio, where he lived, and was planning to stop by and visit with Biljo.  In the months that passed between the letter Biljo received from Ronn and the actual visit, Biljo decided to write and draw an original story involving the character his friend had sent a drawing of.  Biljo intended to then publish the story in his own fanzine, Komix Illustrated.  Back then fanzine were generally published using a spirit duplicator.  Sorry, but an explanation of that “gizmo” will have to wait for another column!

Anyway Biljo was having trouble with his duplicator, so instead, offered the strip to The Texas Trio to use in their fanzine; Star-Studded Comics.  The Texas Trio were three fans from Texas named; Larry Herndon, Howard Keltner and Buddy Saunders.  They accepted the strip and it ran with a cover drawn Biljo White, featuring the character; The Eye in Star-Studded Comics # 3, dated March 1964.  Here’s that cover: 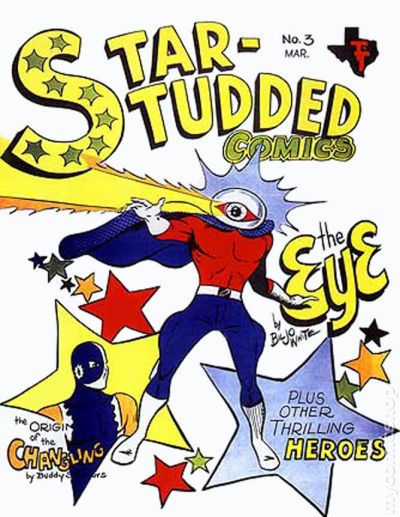 The strip was a hit, so Biljo quickly prepared a second installment and planned to run it in one of his own fanzines, but his duplicator still would not work, so he offered the second strip to the Texas Trio again.  But unfortunately, they were now also having duplicator problems of their own.  So Biljo offered it to another fan; G. B. Love, the publisher of The Rocket’s Blast, down in Miami, Florida!  G. B. was also publishing a series of original fan strips under in the fanzine; Fighting Hero Comics.  So the second Eye strip, “The Eye Unmasked” ran in Fighting Hero Comics # 10 later in 1964.

So what does all this history have to do with The Eye Special # 1?  Well, I’m glad you asked.  Biljo decided that the Eye needed to be featured in a better quality fanzine than the Spirit duplicator, or ditto, zines and so he printed up the Eye Special # 1, as the very first photo-offset fanzine featuring an original super-hero!  And this issue from the Spring of 1965 is it!  Here’s that cover: 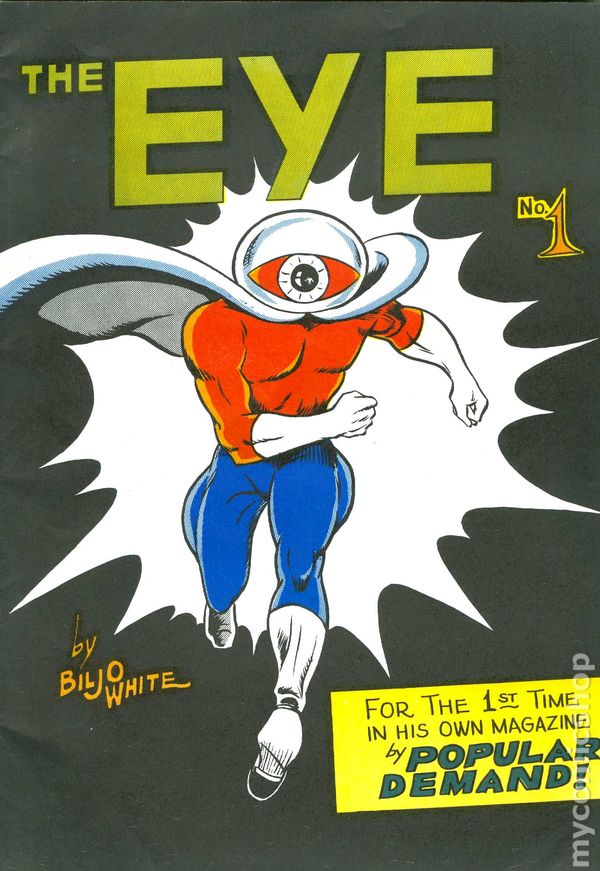 The fanzine reprints, with improved artwork touch-ups, the original Eye story, simply entitled; “The Eye” from Star-Studded Comics # 3 and also provides a page on the powers of the Eye (such as long-range hypnosis, x-ray vision, a powerful burning beam, a flash-beam, plus the ability to mind-probe).  Biljo also included a page showing how the eye helmet worked entitled; “Inside The Eye”.  He also included a story he had done earlier in his fan career, entitled; “Tom Trojan, Private Detective”, plus six episodes of a serialized Eye adventure strip that was currently running in yet another fanzine, Voice Of Comicdom, which was touted as comicdom’s first newspaper!  It was published by the Golden Gate Features Syndicate (San Francisco, CA), and was edited by Bill Dubay.

So that’s what this fanzine from 1965 is all about.  Quite a history!  I do own all the Star-Studded Comics (1 through 18), so one of these days I’ll have to do a series of Fabulous Finds talking about each of these great issues, but that’s for another day.  For today I hope you’ve enjoyed the insight into this forty-eight year old fanzine.  I don’t know about you, but I love talking about the beginnings of comic fandom, so stay tuned for future columns!