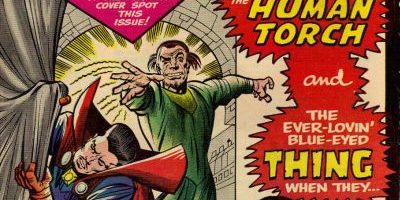 Almost forgot to post today, but I hope you agree that it’s better late than never!  At least I hope you feel that way.    This week it’s time for another Marvel Comics review, so I’ve dug out Strange Tales # 130, cover dated March 1965.  And for those is the know, they already know that back in 1965, Marvel Comics were distributed to the newsstands by an arm of D C Comics.  So the number of books they were allowed to publish each month was limited, and as such, Marvel Comics opted to publish a number of books, Strange Tales included, that were split in half and featured two separate features.

Strange Tales featured Dr. Strange in one strip and the Torch and the Thing, from the Fantastic Four, in the other strip!  Here’s the cover to this week’s RETRO REVIEW: 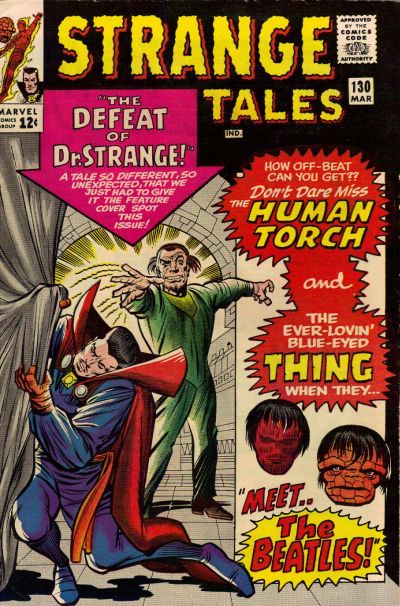 The Dr. Strange story is the one I’m reviewing here today, though the Human Torch/Thing story, entitled; “Meet The Beatles!” has the two members of the Fantastic Four, and their girl friends, going to see the Beatles in concert, though Johnny and Ben don’t get to actually see the concert as they have to go after some crooks who have robbed the box office!  The girls not only get to see the concert, but actually get to meet the Beatles and get their autographs!  Image what those autographs are worth today!  Oh yeah, it’s not real, it’s only a comic!  And it was written by Stan Lee and drawn by Bob Powell and inked by Chic Stone!  Dig that cover, with the Torch and Thing in Beatle wigs!  Gotta love the sixties!

Anyway, now the Dr. Strange story, which is entitled; “The Defeat Of Dr. Strange”.  It is written by Stan Lee and illustrated by Steve Ditko!  This story actually kicks off a seventeen part story line within the Dr. Strange strip and on the splash page within, Stan trumpets … “Beginning now!!  The start of the greatest black magic spectacular ever presented”!

The story opens with Dr. Strange’s arch nemesis, Baron Mordo entering into a partnership with Dormammu, the evil ruler of another dimension, where Dormammu grants Mordo “power without limit” which will enable him to defeat their common enemy, Dr. Strange!  The scene then shifts to Dr. Strange and his mentor, the Ancient One, being attacked within the Ancient One’s Tibetan sanctum.  Dr. Strange is barely able to hold the magical attackers off long enough to spirit the Ancient One away via other dimensional pathways!

Strange plans to hide from Baron Mordo, saying; “the wise man knows there is a time to fight, and a time to flee — to stop and make new plans!”  So the Ancient One’s accountant sets up Dr. Strange with a passport, money and new clothes in which to disguise himself.  But the disguise is to no avail, as Mordo’s spys find and identify Strange and attack him yet again! Using his magic, Strange is able to elude Mordo’s minions and the issue ends with Dr. Strange running into the night, alone, seeking a place he and hide and plan how to fight Mordo!

Not a bad beginning to a long story line, though I wonder if either Lee or Ditko knew it would continue over the next sixteen issues, when they wrote and drew this first installment.  I think the overall story is a good one and recommend you search it out.  Of course, you don’t need to hunt the back issues,as you can pick the beginning of the story up in Marvel Masterworks, Volume 23 and the end of the story in Marvel Masterworks, Volume # 49.  It was also reprinted in the Essential Dr. Strange # 1, in black and white, for those of you on a tighter budget.

See ya next week!