Spook Show Cinema #25: Behind the Mask – The Rise of Leslie Vernon 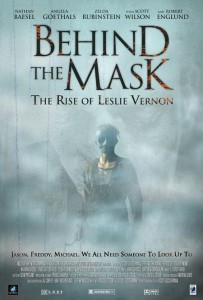 I attended the annual Detroit area horror convention, Motor City Nightmares, a few years back and ended up winning one of the raffles. One of the items in the prize bag was an original one sheet poster for the movie Behind the Mask: The Rise of Leslie Vernon. I wasn’t terribly excited since I hadn’t heard of it before. About a week later I rented a newer horror movie and one of the previews was for Behind the Mask. I took it as a sign. I should probably check this movie out. I wandered in to my local video store and I rented it for $1.00. It had to be worth at least $1.00, right?

Behind the Mask is a mockumentary horror film from 2006 and takes place in a world where movie slashers are real. Jason Voorhees, Michael Myers and Freddy Krueger have actually done all the stuff we’ve enjoyed seeing throughout the years. A three person film crew convinces a young upstart that wants to be an infamous killer to let them document his preparation and first attempt at serial killer glory.

This movie is awesome. From beginning to end Behind the Mask delivers non-stop entertainment. It’s funny, original, smart and it gives a few respectful nods to the films that inspired it. There isn’t a single thing I would have changed about this movie. Scott Glosserman directed it and co-wrote it with David J. Stieve and they did an amazing job. The story is fun, intriguing and flows perfectly from one act to the other. Nathan Baesel has an undeniable charisma that draws you in and makes you forget that his wanting to kill people is a bad thing. Angela Goethals does a fantastic job of playing a curious journalist that’s getting wrapped up in the story she’s covering. Robert Englund (Freddy Krueger from the A Nightmare on Elm Street series) is able to flex a different acting muscle and Kane Hodder (Jason from Friday the 13th Parts VII-X) even has a brief cameo. Every character has a purpose in this movie and there’s not a single waste of space to be found.

This is one of my all-time favorite horror movies, which is not something I say frivolously. I take my horror movies seriously and this is one that I go back to quite often. It’s such a fun ride and I can’t say much more about it without risking overhyping it, which is never good. Last I heard a sequel was in the works, which I kind of hope we don’t see. This is one that works great as a single film and should be left alone without being tainted with a sequel that will most likely not live up to the original. That being said, I hope everyone involved in this movie makes more movies in this genre, because I think there is some really great stuff that could be made by them.

The Wizard of Oz, An American Holiday Tradition
November 22, 2021
Go to Top