Welcome back to another Fabulous Find!  This week I’ve pulled out my copy of the 1965 flexible record entitled; “The Voices Of Marvel”.  This was part of the 1965/1966 official Merry Marvel Marching Society membership kit.  Unfortunately, I did not join up back then, and therefore I do not have the rest of the kit, but I did purchase this flexidisc in a comic book shop in Cleveland, Ohio a number of years ago.  Here’s what both sides of the sleeve look like, the front: 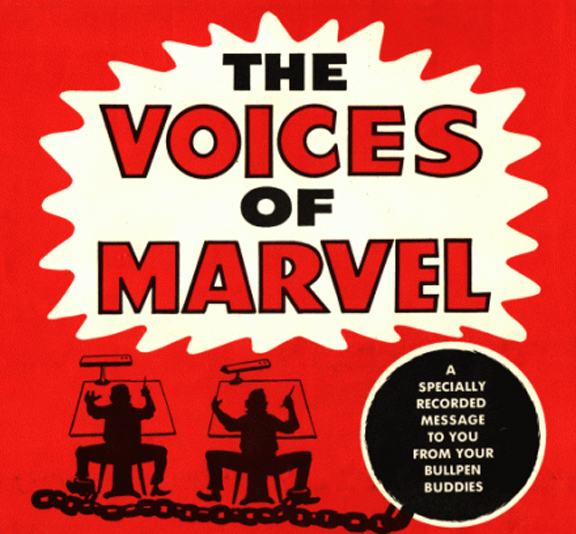 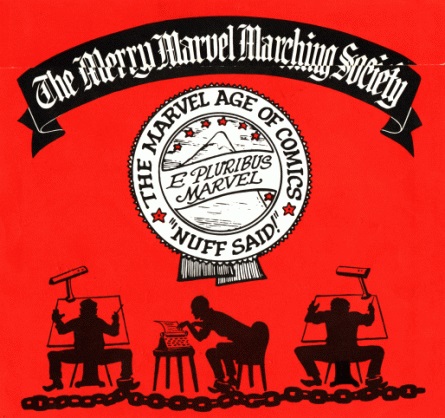 Voices of Marvel back

The record, or flexidisc, is single sided and features Stan Lee and Flo Steinberg (Stan’s secretary and girl Friday)  speaking to various Marvel Comic book company personnel, like Jack Kirby, Don Heck, Wally Wood, Artie Simek, etc.  Steve Ditko is mentioned, but his voice does not appear on the record!  There is no real purpose to the record, but back in 1965, where else were you going to get to hear Stan and the Marvel bullpen speak, unless you lived in New York City and were lucky enough to make your way into Marvel’s offices! 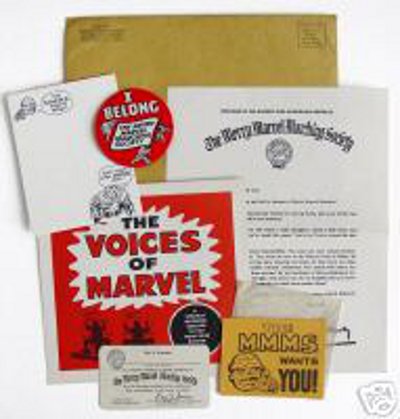 Sorry, I was not able to find a clearer picture of the contents.  But here are a couple of close-ups: 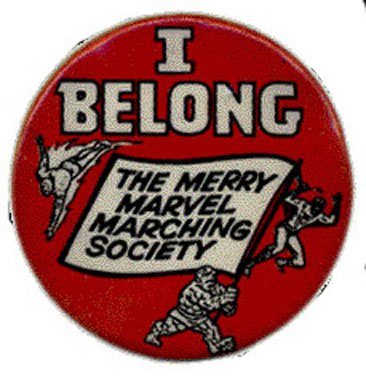 And you received all of this for one dollar!  That’s correct, for one measly buck you got all of the items I listed above!  Pretty cool and quite a value for your dollar!  I even understand that later on, the membership kit was discounted to 89 cents!  Can you imagine?

Anyway, I wish I was savvy enough to have ordered this back in the day, but then again, a buck back then would have bought eight comic books at 12 cents a piece!  So if the question was, can I afford to buy eight comic books, or can I afford to buy the M.M.M.S. membership kit, I know I chose to buy the comics, with my hard earned allowance money, rather than splurging on the cool Merry Marvel Marching Society membership kit!

Oh, one more thing;  If you’re not as lucky as I, to own this collectible, you can still here Stan and company, via the modern technological wonders of YouTube: