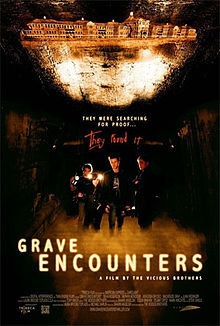 Grave Encounters is set up to be the raw footage of what was supposed to be the sixth episode of a paranormal investigation show of the same name. The crew lock themselves in an abandoned psychiatric hospital overnight in an attempt to make contact with some spirits. Things don’t go as planned, which is to be expected.

I dug this movie. It wasn’t the greatest I had ever seen but it wasn’t nearly as bad as I expected. Most ghost movies come off as really cheesy to me. I attribute this mostly to the showing of the ghosts. They always feel the need to heavily blacken the eyes and add crazy effects to them, which I believe is completely unnecessary nowadays. It’s almost like filmmakers have to sign a contract saying they’ll portray ghosts in that manner. I’m a firm believer in “less is more” when it comes to ghost movies. That being said, this film does the above but I was strangely ok with it. The fact that they didn’t over use it is what made it ok.

They spend just the right amount of time building the atmosphere and getting you invested in the story. One thing that I really dug was that they didn’t try to sway you either way on ANY of the main characters in the beginning. Usually there’s a character you either love or despise, but not in Grave Encounters. I was pretty neutral on all of them until the proverbial cookie began to crumble. When things started getting intense it was cool to see how the different characters reacted to the events as they unfolded. When it was all said and done Grave Encounters felt very familiar, but I was ok with it. It was fun and didn’t take itself too seriously, which is what this movie needed to do in order to succeed. 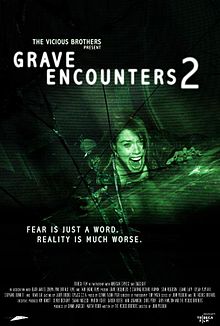 I enjoyed Grave Encounters enough to check out the sequel, Grave Encounters 2, which sounded like it had a decent story. The thing that intrigued me about Grave Encounters 2 was that it was a direct sequel. Some people that saw the movie decide to investigate whether it was real or not, so they head to the hospital to check it out. It sounded good at the time, much like every bad idea I ever had.

I was not a fan of this movie by any stretch of the imagination. I hated the characters as soon as I saw them. Just looking at the main dude irked the hell out of me. The main point of the story was ruined by unnecessary character development and I was finding it hard to keep watching. There is a major revelation after they get to the hospital that was so stupid that I was now in “just how bad will this get” mode. The answer: really, really bad. This is as much effort as I’m going to put into talking about this one. My recommendation is to treat Grave Encounters 2 like The Godfather, Part III. Pretend like it doesn’t exist.