Face Front Fans!  It’s time for another RETRO REVIEW.  And this week I’m looking at the Fantastic Four Special King Size Annual # 3, from the summer of 1965!  And yes, it really says that on the cover, see for yourself: 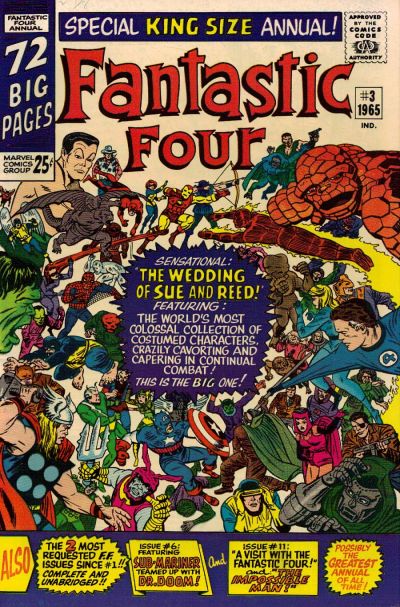 It also boldly proclaimed that it contained “72 Big Pages”, but only 23 of them were new material.  But as one of the busiest covers of all time shouts, those 23 original pages featured the wedding of Reed Richards and Susan Storm!  The rest of the book featured reprint material from Fantastic Four # 6 and # 11.

The cover is drawn by the King of Comics, Jack Kirby, with inks provided by, Mike Esposito. And as the cover also indicates, this issue features just about everyone in the Marvel Universe, though not the Sub-Mariner or the Hulk, even though they were drawn by Jack on the cover!  See for yourself, they both appear on the left side of said cover

The story itself, entitled; “Bedlam At The Baxter Building!” is written by Stan “The Man” Lee,  is pencilled by Jack “King” Kirby and inked by Vince Colletta.  And it opens with the villainous Doctor Doom reading a copy of the Daily Press newspaper.  I guess that the Daily Bugle didn’t offer home delivery in Latveria!  And the headline reads; “Today’s The Day: Wedding Bells For Reed And Sue!”  I wonder why a paper published in Latveria would dare to run such a headline and risk Von Doom’s wrath?  But it did!

Doom admits that Reed Richards is the only man in the world to ever defeat him and vows to get revenge, on this day when he’ll least expect it!  His plan, in his own words, “must be foolproof, irresistible and all-powerful!”  So he uses a handy, emotion charger machine, to fan the flames of hatred in the hearts of every evil menace and has these emotionally charged villains, attack the Fantastic Four as the wedding draws near!  First the Puppet Master attempts to sneak in a puppet controlled wedding guest, but Nick Fury and the Agents of S.H.I.E.L.D. foil the plot before the guest even enters the Baxter Buliding.  Next up is the Mole Man and his moloids!  They burrow into the building from below, but the Thing and the X-Men.

Next up it’s the Red Ghost and his super-apes.  They make it to the dressing room of the bride, but are defeated by Reed & Johnny Storm, with the assistance of Doctor Strange!  Daredevil prevents a group of Hydra agents from driving a “vortex bomb” into the Baxter Building.  Captain America, with a little help from Hawkeye and Spider-Man, defeats Cobra, Mister Hyde, the Executioner and the Enchantress!  Thor takes on the Super-Skrull and the X-Men and all of the Marvel heroes face off against Electro, the Manderin, the Black Knight, the Unicorn, the Melter, the Beetle, the Thinker and his amazing android.  Quicksilver defeats the Human top and then Attuma and his Legions appear in the harbor, about to attack.

But remember that “vortex bomb” that Daredevil stopped from getting delivered to the Baxter Building?  Well, he’s driven it to the harbor, where he sends it crashing into the Hudson Bay, so the city won’t be harmed.  And as luck would have it, the vortex that is created in the water draws off Attuma and his Legions!

The Watcher appears and brings Reed to his home on the moon, where he allows Reed to remove one and only one item, which will enable him to defeat the plethora of baddies ruining the wedding!  Reed chooses wisely and is returned to the Baxter Building by the Watcher.  He analyzes the gizmo and determines that it is a “time displacer”, which is capable of transporting living beings back to the immediate past!  He uses the gizmo and all of the villains are transported back in time before they attacked, and as a plus, it leaves them with no memory of what has happened between now and back then!

Reed also deduces that only one man, Doctor Victor Von Doom, could have been responsible for this attack.  And frankly the weakest part of this resolution, is that the Watcher’s machice has also caused the one responsible to lose his memory, as well.  Rather far fetched, if you ask me!

But it does enable the wedding to continue and Reed and Sue are married, and that only leaves Stan Lee and Jack Kirby trying to get into the wedding, but they are turned away by Nick Fury & his S.H.I.E.L.D. agents; Dum Dum Dugan and Gabe Jones, due to having no invitations.  And the story ends with Stan and Jack walking away in their wedding finery!

All in all, a pretty wonderful issue, even for young boys that would normally not want to read a comic book about a wedding!  And as I mentioned earlier, even the the Sub-Mariner and the Hulk, do not appear in the story, other than a token appearance on the cover, their whereabouts are accounted for a caption, explaining why they couldn’t attend.  But considering that Prince Namor was in love with Susan, I find it highly unlikely that he would have attended her wedding to Reed anyway!  And is there a place at any wedding for the Hulk?  Now that would be just asking for trouble!

This issue, as is all of the early Marvel annuals, is well worth adding to your collection!  I’ll leave you with this early FF pin uo by the great Jack Kirby! 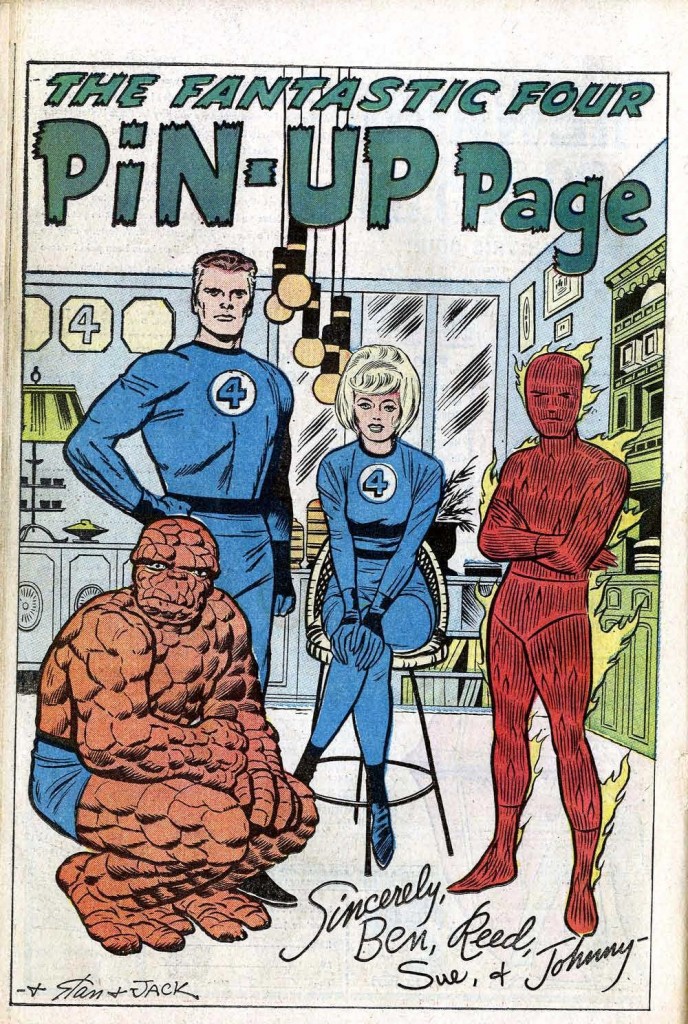