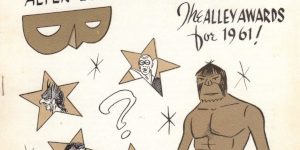 Yes indeed, it is time for another Fabulous Find and this week I’m digging around in the fanzine section of the comic book vault and have unearthed issue # 4 of the original Alter Ego fanzine. It was published by local comic book fan and historian, Dr. Jerry Bails, from Detroit, MI. Believe it or not, the Detroit area was very involved with the beginnings of comic book fandom back in the early 1960s.

This issue was published in the Fall or 1962 and features a cover drawn by another one of comic fandom’s founding fathers, artist Ronn Foss, with the inks provided by Richard “Grass” Greene.

The cover besides featuring a number of super-heroes from various companies, but primarily from DC Comics, features a large Alley Oop figure which was the winning entry for a contest to create an Alley Oop figure to be used as an award statue for the Alley Awards for 1961. Foss won the honors with early super fan, Biljo White, coming in second.

The interior of the fanzine opens with “A Parting Shot”, rather than what one would normally expect, “An Opening Shot” Within this editorial, Dr. Bails announcing that this issue will be his last as publisher and editor. He goes on to say that Ronn Foss will be succeeding him, with issue # 5, being Foss’ first issue.

Next up is a Table of Contents page with an heading drawn by Harry Thomas, as well as, the indicia for the issue in hand. Following this page is a page announcing the winners of the Alley Awards for 1961. DC Comics swept the awards, but you must remember that the only Marvel Comics comic that was published in 1961 was Fantastic Four # 1, so you would hardly expect them to make a mark of the awards.

For 1961, the best comic series was; The Justice League of America. Best cover; The Flash # 123, the “Flash of Two Worlds” story, which brought back the Golden Age Flash. This comic also won the best single issue award. The best artist was won by Carmine Infantino. There was even a special division for the worst comic book, which was won, or maybe that should be lost, by Wonder Woman!

Next up was three page report on the Academy of Comic Book Arts and Sciences, written by Roy Thomas. Then a long, ten page, article on the MLJ comic group written by Howard Keltner, with lots of character images from their pages. Characters like; Captain Flag, Mr. Justice, the Hangman, the Shield, the Web and Black Jack (who I had never heard of previously).

There is a letter/article by professional Paul Reinman, in which he shares some reminiscences that runs about two pages. Then an article entitled; “Maximo, The Superman Before the Time of Superman”. This was written by Ed Lahmann. The catch was that Maximo was not found in comics, but rather within the pages of the Big Little Books during the early 1930s.

Next up is an article which runs seven pages, written by Ron Haydock, who writes about the Batman & Robin movie serial. It is illustrated by Foss. Here is the opening illustration:

Next up is a column named; The Hall of Infamy written by L. L. Simpon which looks at classic villains within comic books. Featured villains this time around are the Claw from Silver Streak Comics, as well as, Daredevil Comics (No not today’s Matt Murdock Daredevil from Marvel) and IronJaw (No, not the short lived Atlas Seaboard barbarian character). This IronJaw was associated with Adolf Hitler, at least in the comics.

Things (yeah, pun intended) are finally wrapped up with a early Jack Kirby drawing of the Thing, from the Fantastic Four comic book. This was done specifically for Dr. Bails for Alter Ego, as you can see by the sign that the Thing is holding:

So that’s a look at Alter Ego # 4, from the Fall of 1962. A pretty nice package within it’s thirty-four pages and the last issue published by Dr. Bails. It is one of my oldest fanzines and I hope you enjoyed this look back on early comic book fandom.

I’ll be back next week with a new RETRO REVIEW, or then again, maybe another new FABULOUS FIND depending on how the wind blows and my mood leads me. Till then …