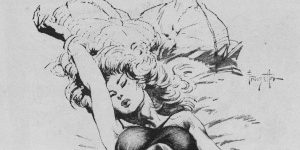 Greetings and salutations, all.  I’m back this week with another cool fanzine from my own collection.  I recently added a complete run of Captain George’s Comic World and Captain George Presents.  The Comic World  began in late 1967, or early 1968, and ran for 28 issues and then there was a name change, to Captain George Presents, for issues29 through the final issue, number 46.  But for this Fabulous Find, I’ve pulled out issue # 15, which is an all Frank Frazetta issue.  It’s listed as “The Frazetta You Didn’t know About … A Portfolio”.  “Captain” George Henderson published this fanzine under the name of Memory Lane Publications, Toronto, Ontario, Canada.  He owned and operated Memory Lane, a comic book and movie memorabilia store, which he opened in 1967.

The fanzine is tabloid sized, i.e. eleven (11) inches by seventeen (17) inches.  It’s printed on newsprint, as was all of Captain George fanzines.  It is not stapled, so you could pull out a particular drawing and display it without harming the fanzine.  It features thirty-two (32) pages of gorgeous art by the master, Frank Frazetta.  I believe that the art reproduced within was magazine and book illustrations that Frank did, so most of this was not familiar to the everyday comic book reader of 1969, when this issue was published.

Here is the cover to this issue:

As you can see, there is no title or any other information on the cover. But once you opened it up, the first interior page provided the buyer with all the information that needed. Take a look:

As I said above, everyone of the page feature beautiful artwork by Frank Frazetta, most of what would fall under the category of “good girl art”. No other words, other than on that first interior page appear, except for the final two interior pages in ads for other publications, both from Henderson and Memory Lane Publications!

I can’t show you all of the pages, as half are two page spreads that my scanner can’t handle, but I will share a couple that I like a lot. So sit back and enjoy the art show …

I believe this issue was reprinted a number of years later, as I have it in my collection, as well. But I now see it first appeared here, as Captain George’s Comic World # 15 and 1969.

Thhhhhaaaaat’s all, folks for this week. But be sure to check back for another Fabulous Find or a new RETRO REVIEW. You just never know which way the wind will blow.