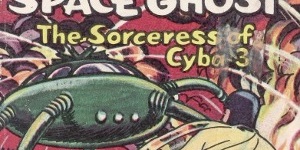 Greetings and salutations, my friends.  Welcome back to a new Fabulous Find.  This week I’ve taken off the bookshelf the Whitman big little book entitled; Hanna-Barbera’s Space Ghost the Sorceress of Cyba-3.  It is numbered sixteen (16) on the spine of the book, but I have also seen it listed as number 2016 (2016).  It’s a small hardback book published in 1968 by Whitman Publishing Company of Racine, Wisconsin.  As you can see by the cover, immediately below, it cost only 39 cents off the shelf in ’68. 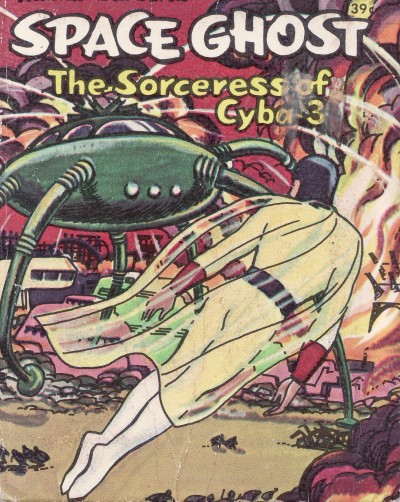 For those not familiar with Big Little Books, they were published, beginning way back in the Thirties, with the very first appearing in 1932, and through at least the Eighties for a fifty plus year run.  Not bad for a small, but mighty line aimed squarely at children.  The books generally featured hard-back covers with pulp quality paper between the cardboard covers.  As the line ended, the last of the books covers were only slightly heavier paper, rather than the hard-back covers of the past.

I own a few Big Little Books, but not a huge collection, by any means.  The ones I own generally feature comic book related heros, like the Fantastic Four, Aquaman, Spider-Man, Superman, the Hulk and Batman.  But I do have a couple of the older books which feature the Shadow, as well as, Dick Tracy.  Please leave a note if you’d like me to do other Fabulous Finds on other Big Little Books.  The books generally alternated a page with a picture with a page with text.

The books themselves generally measure 3 and 7/8 by 5 by 7/8 inches.  Including the covers the Space Ghost Big Little Book is 256 pages.  It features a cover drawn by the Hanna-Barbera staff of artists.  They are also credited for the interior illustrations.  It’s possible, but I can not find confirmation, that the artist responsible for the Space Ghost work, may be Dan Spiegle.  But please do not take this as gospel.

I do know that the story itself was written by Don R. Christensen, as he is credited in the book.  As you can see the cover features full color art.  The interior artwork is four-color illustrations but what appears to be the same artist(s).  In fact here is the title page: 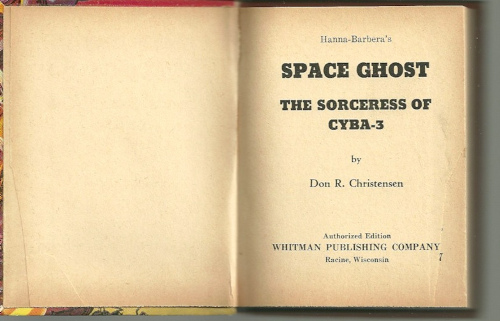 As I mentioned earlier, the Big Little Books tended to keep to the same format, alternating a story page with an art page.  Hey, why change something that clearly worked?  Take a look at the first pages of Chapter 1 of Space Ghost The Sorceress of Cyba-3: 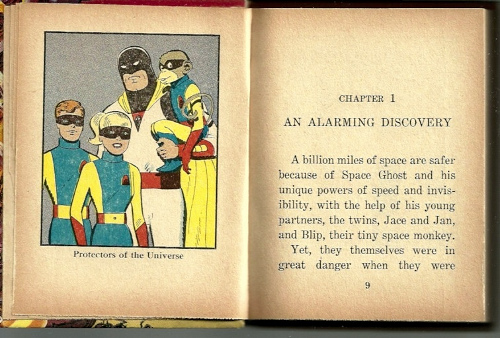 This story features Space Ghost, along with twins, Jace & Jan, along with their space monkey, Blip and pits them against the Queen Satanari, who is the Sorceress of Syba-3.  With a name like that, how could she not be evil?

The story begins with Blip finding a glowing orb, which Jan picks up.  From the orb comes a vision of beauty, but it turns out that this beauty is not good, but evil and quickly Jan falls under her control.  With Jan’s help the Queen convinces Jace and Space Ghost that she needs their help.  They fly off to Cyba-3 the deception continues.

The Sorceress takes Jan and Jace captive and Space Ghost is able to teleport to safety.  She then uses a spider-like robot to go on a rampage.  Space Ghost can’t attack for fear of injuring Jan or Jace!

Using he powers, Space Ghost creates a heavy rain and then he confronts Queen Satanari.  She fires barrage after barrage against Space Ghost but his force field holds him safe.  Space Ghost offers himself in trade for the youngsters and the Sorceress agress.  She removes the chains from Jan & Jace, but before she can secure Space Ghost, invisible hands throw the chains around her!  Space Ghost has managed to turn the tables on Queen Satanari.

And with her secured by the same chains, she can’t use them to strangle the life from Jan & Jace, without endangering herself.  Space Ghost frees his young companions and the evil Queen is again shrunk and enclosed in another glowing sphere, but this time Space Ghost hides the orb on an uninhabited asteroid, which hopefully will hide her prison for a long, long time.

A pretty simply story, but hey, it features Space Ghost!  And just how many other Space Ghost related collectibles are out there?  I think it’s a must have, personally, and you should be able to find one yourself via eBay at a fairly reasonable price.

Hope you enjoyed this week’s post and be sure to return next week for a new RETRO REVIEW, and be back in two weeks for another Fabulous Find.  Until then …happy collecting!